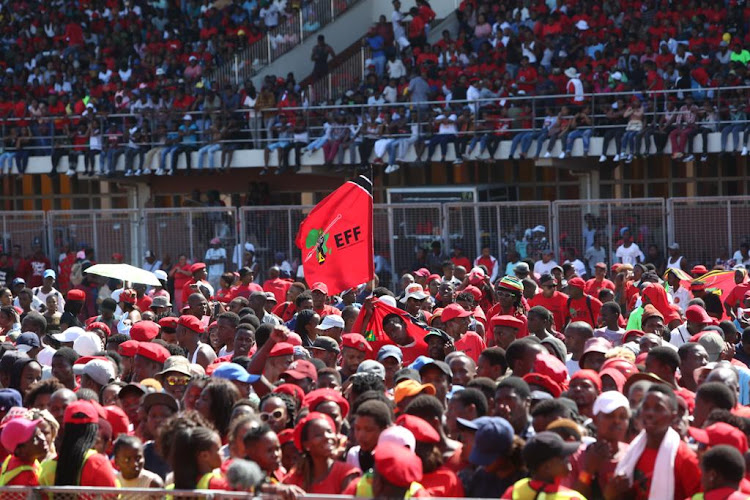 Hundreds of EFF supporters continued to pour into the Chatsworth Stadium, south of Durban, on Sunday afternoon, where thousands more had already gathered for the party's provincial manifesto launch.

Thousands of #EFF members have gathered at the Chatsworth Sport Stadium in Durban for the party's provincial manifesto launch. #JuliusMalema is expected to address the masses. #FeesMustFall activist Bonginkosi Khanyile also to attend, despite being under house arrest. @TimesLIVE pic.twitter.com/jMj5tO1S7V

EFF commander in chief Julius Malema was expected to address supporters at 1pm but by had yet to deliver his keynote address at the Maphiniki Sports Complex in the Northern Cape.

According to the EFF's official Twitter account, Malema was meant to address supporters in the Northern Cape at 10am and then travel to KwaZulu-Natal.

Just after 2pm the EFF tweeted that Malema had arrived in the Northern Cape.

The Son of the Soil CIC @Julius_S_Malema has arrived at Maphiniki Sports Complex, Kuruman and will be giving the keynote address at the #EFFNorthernCapeRally.#VoteEFF #OurLandandJobsNow pic.twitter.com/pldh2a3xeY

There was a strong police presence in Chatsworth, ensuring there were minimal disruptions - barring a fight between a handful of supporters.

A fight breaks out at an EFF rally in Chatsworth as supporters wait for their CIC to arrive . The trouble makers were escorted out of the stadium. @TimesLIVE pic.twitter.com/5iNvCy2ydk

Despite this, an array of entertainment, with performances by local artists Lvovo, Big Nuz star Danger and Zandie Khumalo kept supporters in good spirits. EFF supporters shouted the name of slain Bafana Bafana star, Senzo Meyiwa, when Kelly Khumalo took to the stage.

Khumalo had been dating Meyiwa when he was fatally shot.

Kelly Khumalo performs at an EFF rally in Chatsworth. She only performed two songs as some people in the crowd chanted Senzo’s name and hung a banner saying justice for Senzo @TimesLIVE #EFFKZNRALLY #KellyKhumalo pic.twitter.com/b0TkIKIPkk

After performing one song and getting ready to perform another, Khumalo signalled the DJ and said "one more and then I'm out of here" after members of the crowd towards the back of the stadium grew louder with chants of Meyiwa's name.

Gqom star Babes Woduma was yet to take the stage.

In the wake of major unrest in the province pertaining to a high-profile political murder case, ongoing issues of a lack of basic services and high levels of corruption and crime, Malema's KZN keynote address was expected to be a major talking point and subjected to scrutiny by opposition parties vying to gain a foothold in the country's third-poorest province. 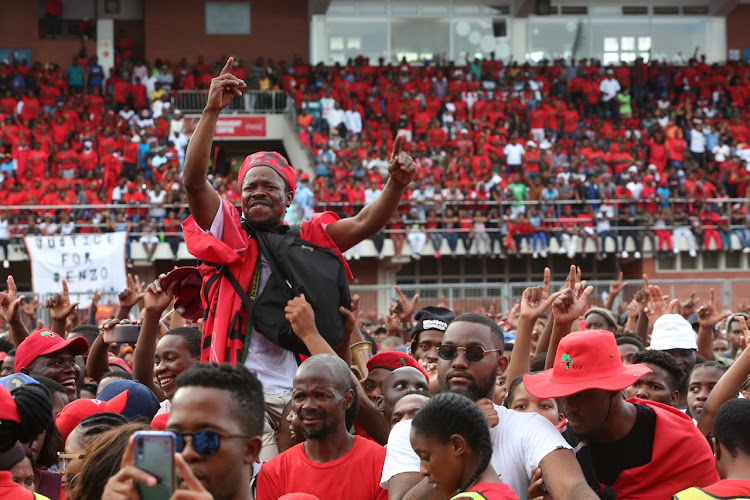 #FeesMustFall activist Bonginkosi Khanyile has been given a ‘get out of house arrest free card’ to attend the EFF KZN rally on Sunday.
Politics
2 years ago

Malema to know fate in 'hate speech' cases next week

The SA Human Rights Commission will on Wednesday announce whether EFF leader Julius Malema and other members of the party are guilty of hate speech.
Politics
2 years ago

The EFF is now one of the major political parties in SA, after the ANC and the DA. The ANC is 100 years old and the DA goes back to the '50s. The EFF ...
Opinion & Analysis
2 years ago