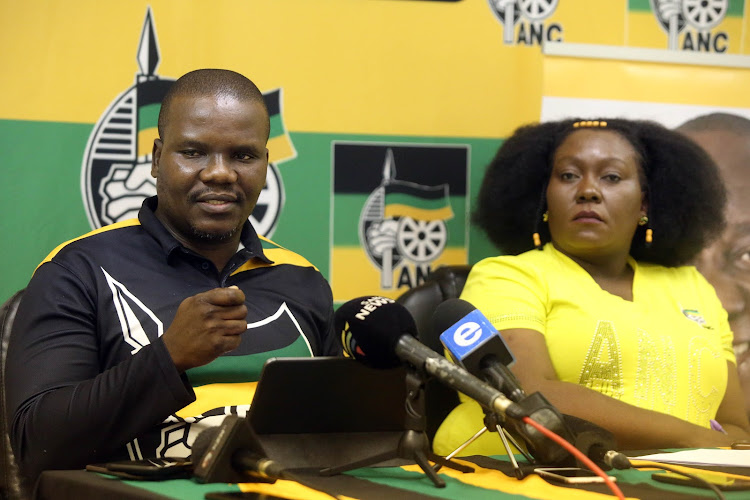 KZN ANC provincial secretary Mdumiseni Ntuli and provincial spokesperson Nomagugu Simelane-Zulu tell journalists in Durban that the ANC had decided that members charged with serious crimes should step aside pending the conclusion of their court cases.
Image: Thuli Dlamini

The ANC in KwaZulu-Natal has decided that its members who have been charged with serious crimes, including Harry Gwala district municipality mayor Mluleki Ndobe and Newcastle mayor Ntuthuko Mahlaba, should step down from their positions pending the outcome of their court cases.

ANC provincial secretary Mdumiseni Ntuli told a media briefing in Durban on Tuesday that the decision was taken after an extraordinary meeting of the ANC provincial executive committee (PEC) at the weekend in the wake of the shocking arrests of Ndobe and Mahlaba in connection with political killings in the province.

The PEC's decision followed the withdrawal of a charge of murder against Ndobe in the Umzimkhulu Magistrate's Court on Monday. Ndobe, Sbonelo Myeza, 39, Mbulelo Mpofana, 34, and Zweliphansi Sikhosana, 48, were charged with murdering ANC Youth League (ANCYL) general secretary Sindiso Magaqa.

Mahlaba, who has been charged with the assassination of ANCYL regional chair Wandile Ngubeni in 2016, has been remanded in custody until Monday next week after his appearance in the Newcastle magistrate's court on Monday.

However, Ntuli announced that Ndobe would remain on the ANC provincial list where he occupied the third spot and that he was poised to be selected among ANC representatives after the May 8 general elections.

ANC KZN PEC has decided that its members charged with serious crimes, including its two mayors, Harry Gwala district mayor Mluleki Ndone and Newcastle mayor Ntuthuko Mahlaba, step aside pending the conclusion of their court cases.

He told the media briefing that the provincial ANC leadership was not targeting anyone but was of the view that it was in the best interests of the party and its members charged with serious crimes for them step "to aside from their positions and responsibilities in government pending the conclusion of their legal cases".

"This decision is inspired by a commitment and determination to defend and advance the interests of our movement and that of the masses of our people. It does not mean an acceptance of guilt nor to cast aspersions on the innocence of the accused members of the ANC," he said.

The reputation, integrity and standing of the organisation was far greater than any of its individual leaders, he said.

Ntuli said the ANC stood firmly with the victims and unconditionally supported the arrests of anyone found to have been directly or indirectly involved in the killings.

"We stand by this principle, irrespective of the alleged perpetrator. This principle also applies to all ANC members who are in custody and those accused of being involved directly or indirectly in the killings of so many of our comrades who perished under circumstances difficult to explain," said Ntuli.

The party had also noted that the arrests of some of its leaders had created tension among its members which was evident when some of them went to the courts in support of the accused or in solidarity with the families of the victims.

Ntuli said the ANC had also reaffirmed its earlier decision that none of its members should use court cases or social media as platforms to vilify their comrades and tarnish the image of the organisation. He warned that the party would act against those who continued to conduct themselves in a manner that was inconsistent with the decisions of the organisation.

The ANC has also praised the task team set up by President Cyril Ramaphosa to investigate political killings in the province for its work which resulted in the arrest of Ndobe, Mahlaba and other party members.

"The task team has done a great deal of work. There is quite a number of people who have been arrested as a consequence of the hard-working members of the task team. The ANC has remained the greatest defender of the fundamental principle that the perpetrators must be held accountable for the killings of comrades," said Ntuli.