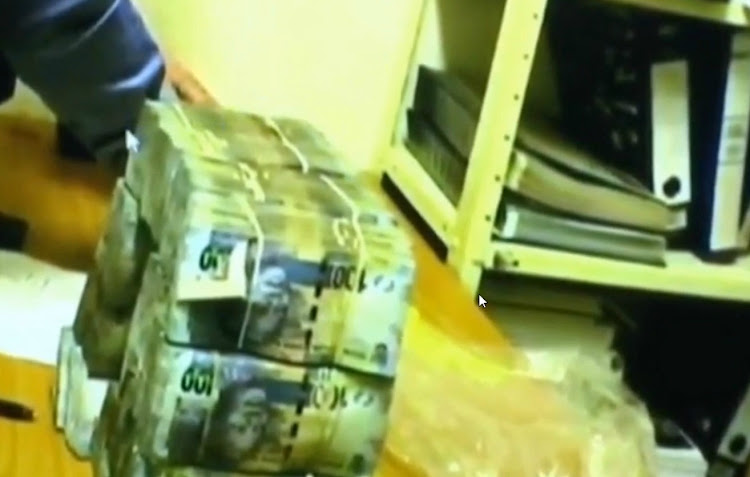 Dramatic footage of cash being counted in the vault of Bosasa was shown at the state capture inquiry in Parktown on January 17 2019. Bosasa's taxman Peet Venter testified on Wednesday that he was instructed to make illegal payments during his tenure at the company.
Image: MultimediaLIVE/Screenshot

Speaking at the state capture inquiry on Wednesday, Venter said the "last nail in the coffin" came when Watson allegedly asked him to hand over a bag of money to former correctional services CFO Patrick Gillingham in October 2017.

This corroborates the statement of former Bosasa executive Angelo Agrizzi who previously claimed Gillingham was on the company's payroll.

"I was instructed to make payments on behalf of [Watson] … He would use people to give instructions to do certain things. I only dealt directly with [Watson] the last year and a half I was with Bosasa and that's when I experienced first-hand instructions from [Watson]," Venter said.

Here are some of the figures that Venter implicated in his testimony.
Politics
2 years ago

Venter also reiterated his testimony from Tuesday in which he said he was instructed to facilitate the payment of former SABC boss Hlaudi Motsoeneng's legal fees as well as a R500,000 payment to a trust belonging to President Cyril Ramaphosa's son, Andile. This money was in fact donated towards Ramaphosa's 2017 presidential election campaign.

Venter said in October 2017 Watson instructed him to hand over a bag of cash to Gillingham when the pair met later that day.

He said he assumed there was cash in the bag and that he did not know what the money was for. Venter was meeting Gillingham to discuss tax issues relating to his pension payout.

"I handed him the parcel, he took it and we continued with our meeting. I just told him that I was with Bosasa's offices this morning and they asked me to hand this to him," Venter said.

WATCH LIVE | Bosasa back in spotlight at state capture inquiry

Former Bosasa COO Angelo Agrizzi is due back in the hot seat at the state capture inquiry on Tuesday.
Politics
2 years ago