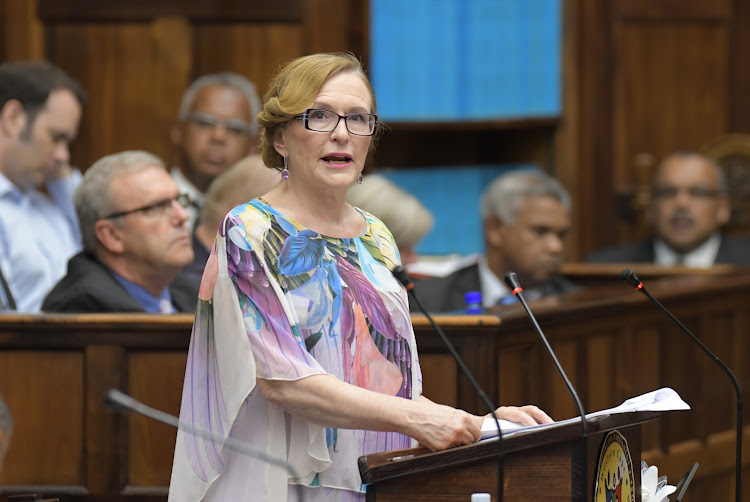 Western Cape premier Helen Zille during the State of the Province Address at the legislature on February 15 2019 in Cape Town, South Africa.
Image: Gallo Images/Jeffrey Abrahams

The Western Cape ANC's battle to topple the DA from power in the province has been made even harder following a glowing endorsement of the DA-led provincial government by the national assembly.

Outgoing Western Cape premier Helen Zille revealed on Wednesday that she had received a note of congratulations from national assembly speaker Baleka Mbete, praising the performance of her provincial government since the DA came into power 10 years ago.

The note is based on approval of a DA motion by a sitting of the assembly in February 2019.

It appeared to be one of those politically bizarre moments where the majority ANC in the house - which regularly blocks any DA attempts to tout its record that where it governs, it governs best - may have been caught napping. The motion outlining a fabulous track record of the DA in the Western Cape was passed without objection by the ANC or any other party.

"The assembly acknowledged that since 2009, the Western Cape completed over 200,000 housing opportunities, and is on track to meet 100% of its targets by the end of the current term," she continued.

"The assembly commended the fact that since 2009 more than 100,000 [people] have received title deeds across the province, having exceeded their targets by at least 2,000 every year and making great strides in helping people become homeowners.

"The assembly recognised that 91.5% of Western Cape households now live within 30 minutes of a health care facility and the assembly congratulates the Western Cape provincial government in achieving these massive feats," read the letter.

In a media statement issued on Wednesday, Zille said thanks should go to her cabinet and all the dedicated officials within the Western Cape government.

"For 10 years we have been building the capable state in the Western Cape. We are South Africa's cleanest government with the most clean audits. This ensures that every rand goes towards service delivery, which is why we were able to accomplish huge projects like connecting over 80% of schools to free internet," she said.

DA MP Lungiswa James, who tabled the motion, could also not explain how no one from the ANC sought to block it. "Maybe it's because it was based on facts. The numbers speak for themselves," she said, laughing.

Parliamentary spokesperson Moloto Mothapo explained that it was parliamentary practice for the speaker to convey a motion agreed upon by the house to the relevant people.

Large-scale farmers operating huge vineyards in the Cape winelands and other commercial farms have expressed confidence in the leadership of ANC ...
Politics
2 years ago

Xolela Ndude never expected that soccer would transform his life.
Sport
2 years ago