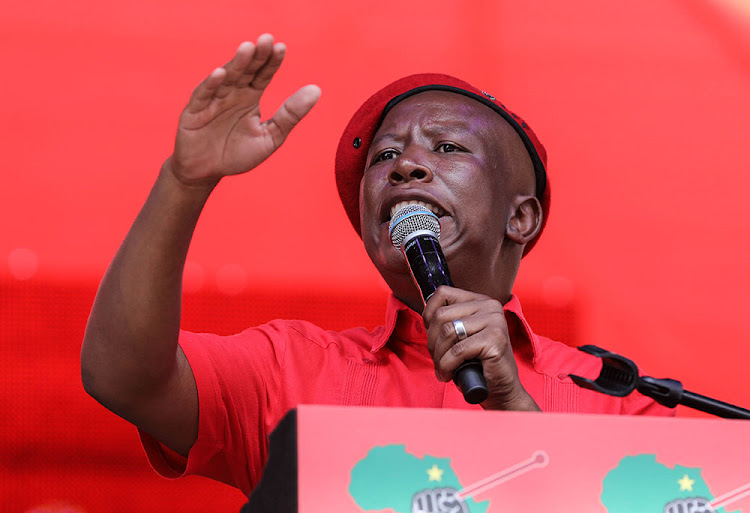 EFF leader Julius Malema has told journalists that the party is a well-oiled machine that is ready to govern.

Malema spoke about land expropriation, Cyril Ramaphosa and the protests which disrupted the Gangster State book launch on Tuesday.

Here are six explosive quotes from the meeting.

Malema: There is nothing special about white farmers and white people. pic.twitter.com/t3rGv8rkB2

"The burning of the Gangster State book is unacceptable. It doesn't matter how strongly we might disagree with the author. That is being anti-intellectual."

Malema says the ANC “UDF cabal” may be behind #GangsterState book. pic.twitter.com/8PFvXZ1ZCW

"Your new dawn is showing you flames, literally. It's now burning books and your charming president has not said anything so far. It is the same new dawn which released a statement on Ace and later withdrew it."

Malema says the #AlexTotalShutdown is ANC-sponsored as part of their election campaign strategy but “is going to backfire” pic.twitter.com/PBwRgeRuby

"Cyril won't finish his term of office. If he dares remove [state capture implicated ANC members] from the list, like he did in Limpopo removing elected people because of VBS, he will not last. They have gone to ground now. They are working the branches now. The conference will take place in June 2020 and he won't come back, I can tell you now."

We are better than the ANC

"No worker has not been paid in the EFF, no office has not had stationery, we are running solid machinery. We are well prepared for the national elections."

Malema says the EFF will never go into a coalition with the DA again pic.twitter.com/he87D6vSin

The EFF has poured cold water on claims made by former central command member Thembinkosi Rawula that party money was mismanaged by Julius Malema and ...
Politics
3 years ago

Malema will not gain mass support by picking on racial minorities

An acolyte of Peter Mokaba, the EFF leader is focusing his politics on a narrow African nationalism that failed to gain ground in the ANC
Opinion & Analysis
3 years ago

Malema off the hook, but others get a hate speech hammering

EFF leader Julius Malema is off the hate speech hook for a series of “offensive” remarks against white and Indian people, but another firebrand ...
Politics
3 years ago