From mud huts to smartboards: Cyril Ramaphosa promises to speed up school upgrades 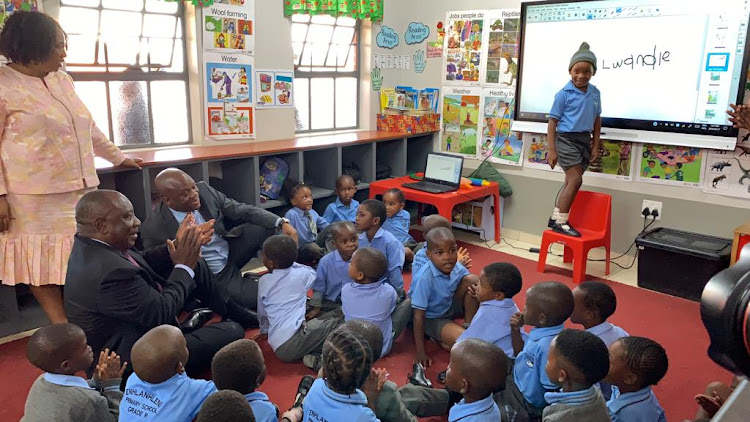 President Cyril Ramaphosa has committed his government to correcting the injustices of the past by accelerating the installation of infrastructure at the country's schools.

Briefing the media shortly after a tour of the state-of-the-art Enhlanhleni Primary School in Dannhauser, northern KwaZulu-Natal, on Wednesday, Ramaphosa said apartheid had left a huge challenge and "the biggest mess that you can imagine".

"Over the past 25 years, we've been working very hard and we're going to continue working to correct what was done in the past. We're going to speed up now that we have the model," he said. "The resources are going to be the biggest challenge because it is a resource issue, but we're going to speed up the installation of infrastructure in our schools and correct some of the things that have not been properly done."

Ramaphosa said he was confident that the government was on the right path. "We're going to do things correctly for our children because they are our biggest investment," he said.

He also reiterated government's commitment to provide primary school children with tablets in the next five years.

The president was in KZN for the official handover of three new primary schools: Enhlanhleni, Lembe and Ingweni.

The schools were built under the department of basic education's accelerated school infrastructure delivery initiative (Asidi) in partnership with the Adopt-A-School Foundation (a partner of the Cyril Ramaphosa Foundation) in a bid to eradicate schools without water and sanitation.

At each of the three rural schools, mud structures built by local communities more than 30 years ago have been replaced with state-of-the-art infrastructure.

Enhlanhleni, in the rural Kliprots area of Dannhauser, now boasts five new classrooms, two renovated classrooms, an administrative facility, one multipurpose classroom and a science lab, as well as a multimedia centre with a fully equipped library and computer centre.

The upgrade created 114 temporary jobs and has benefited the school's 335 learners.

Forty touch-screen laptops have been donated to the learners and another 10 for teachers at the school.

Ramaphosa was accompanied by basic education minister Angie Motshekga and acting premier Sihle Zikalala, along with other dignitaries.

The president also used the occasion to win votes for the ANC on May 8. He urged local residents to vote so that the government could continue building infrastructure for them.

Another school looted by thieves, this time in Midrand - and Lesufi is livid

A Midrand school was cleaned out of cash and computers on Monday night, the Gauteng education department said on Tuesday.
News
2 years ago

President Cyril Ramaphosa has cautioned the residents of Polokwane not to vote for smaller parties who claim "they are the incoming government".
Politics
2 years ago