'It was difficult to campaign for the ANC under Zuma': Thabo Mbeki 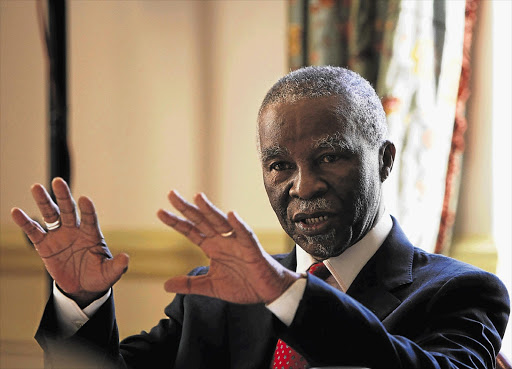 Former president Thabo Mbeki says the ANC's admission that it 'veered off course' meant the party was now committed to resolving its issues.
Image: SIMPHIWE NKWALI

Former president Thabo Mbeki has admitted that it was difficult for him to campaign for the ANC under the administration of his successor Jacob Zuma.

Speaking at a short media briefing on Tuesday at the ANC pavilion at the Rand Easter Show, Mbeki said it was now possible for him to campaign for his party.

He added his signature to a board pledging his vote for the ANC come the general elections on May 8.

"The manifesto of the ANC, it's got a section which talks about the ANC has made many mistakes, that it has also veered off course and talks about the consequences of that which includes corruption, loss of integrity, lawlessness ... It was very important that the ANC should say that, to say to the people of SA that we recognise these things," he said.

"You would recall that for many years we have had a different approach to this issue. As we were busy veering off course, they were busy saying they have a good story to tell. I could not personally come say to a person come vote for the ANC knowing very well the wrong things that were happening. It would not be honest of me to go and talk to people like that.

With only two weeks to go before the election, there are still unanswered questions about the people voters will actually be electing.
Politics
2 years ago

"That is why it becomes possible for me now to say vote ANC. The organisation is trying to make a detailed commitment on what to do with economy, social cohesion, the land … in the context that we don't want to continue veering off course, and continue saying that we have a good story to tell when things are not going well."

He said because the party admitted that it had "veered off course", it meant that it had committed to resolving its issues.

He also spoke about the party's controversial parliamentary list, saying it was up to the ANC's integrity committee to decide on the matter.

"The issue of the lists obviously comes up ... The ANC has got its own structures and what has happened again, as you know, is that that whole list was given to the integrity committee of the ANC.

The brother of former president Jacob Zuma, Khanya Zuma, has told the Sunday Times he believes that his brother was sent by God to liberate the ...
Politics
2 years ago