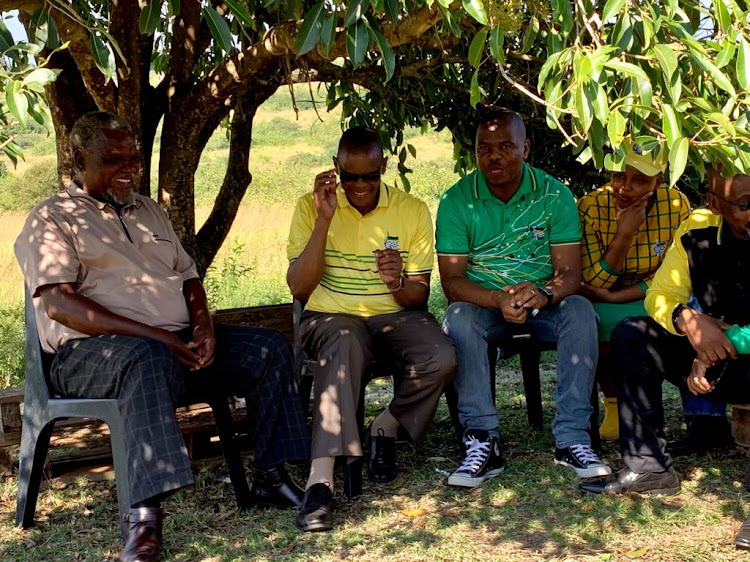 ANC secretary-general Ace Magashule pays a courtesy visit to Chief Mbusowabathethwa Mthethwa in the KwaMthethwa tribal authority in northern KZN before a door-to-door campaign in the area on Thursday.
Image: Jackie Clausen

ANC secretary-general Ace Magashule has promised residents during a door-to-door campaign in northern KwaZulu-Natal during the party's final push for votes ahead of next Wednesday's general elections that the ANC is going to work very hard to fulfil its promises.

The SG, who has been the subject of much controversy - most recently following the launch of an investigative expose into his allegedly corrupt business activities in the Free State - was in the Musa Dladla region in Empangeni on Thursday to garner votes for the ANC just six days before the poll.

Magashule was joined by former SAA chairwoman Dudu Myeni, who is from the region, and ANC MP and former Cosatu boss Sdumo Dlamini, MKMVA spokesperson who works in Magashule's office Carl Niehaus and local ANC leaders.

Local residents complained about a shortage of water, a lack of infrastructure such as roads and the high unemployment.

Before conducting the door-to-door campaign, Magashule paid a courtesy visit to Inkosi Mbusowabathethwa Mthethwa of the KwaMthethwa tribal authority to introduce himself and ANC leaders.

After a brief engagement with the local chief under a tree, Magashule told the media: "We're here for a final push. We're here to further inspire our communities and people to vote ANC.

He said Mthethwa had told him they have the land but don't have tools and equipment to work it.

"I'll report back to the president and the government. It's just too late, it's six days before the elections. We don't want people to say we're buying votes. We're not buying votes. Our people need all these things now, they don't need them tomorrow.

"We're happy that our traditional authorities are using the land and they want to use the land effectively so that there is food security."

The ANC secretary-general wrapped up his election campaign by addressing a rally at the local sports field.

Zuma is expected to join Magashule on the ANC campaign trail in Durban on Friday.

ANC secretary-general Ace Magashule has called on all governments run by his party to end outsourcing of workers.
Politics
3 years ago

'It's empty, there's no food,' voter tells Ace Magashule, pointing at her fridge