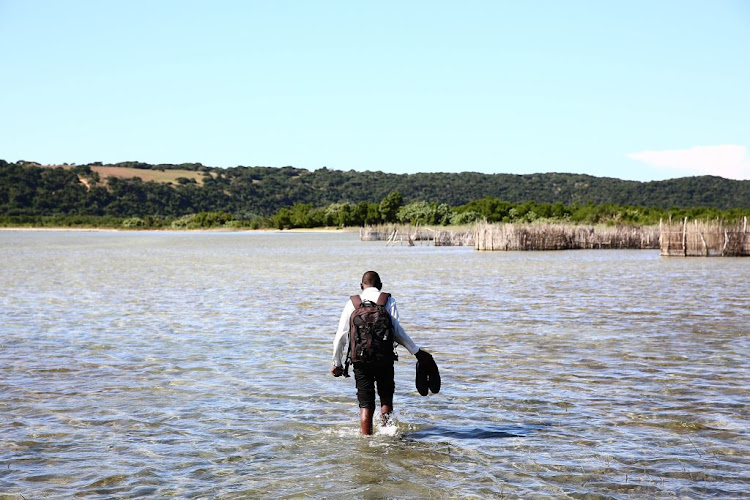 A child wades through the water in Enkovukeni, northern KZN. On Tuesday ballot papers and IEC staff will be transported across the crocodile-infested river to the remote village by a search-and-rescue boat.
Image: Thuli Dlamini

On Wednesday, 218 registered voters who live in Enkovukeni - an isolated village of just 80 homesteads in the far north of KZN where residents have to cross animal-infested water to do just about anything - will join millions of other South Africans across the country to cast their votes.

But their polling station won't operate like the thousands of others across the country.

The ballot papers and electoral commission (IEC) staff will be transported to the village by a Richards Bay search-and-rescue boat. Five IEC officials will preside over the polling station at Enkovukeni primary school, together with about a half dozen political party representatives, and the police.

The reason the polling station has to close early is so that IEC officials can cross the water back to the mainland before it gets dark. It was the same during the local government elections in 2016.

Enkovukeni is nestled on top of a hill which rises from the centre of Kosi Bay, its homes hidden from view by lush natural forest. And thanks to its location on an island in the lakes that make up Kosi Bay, its residents have to cross animal-infested water regularly. Hippos and crocodiles are the most feared.

If there is a death in the family, the coffin has to be carried across the water, held high by grieving relatives or friends. If a home needs renovating, the materials have to be ferried across the water. While the abundant waters provide the fish that sustain the community, they also separate residents from even the most basic of services.

The area is still trapped in the past, with no running water, no electricity and virtually no roads.

Enkovukeni is a thin 5km strip of land, stretching from Bhanga Neck to Kosi Bay Mouth with the Indian Ocean on one side and the Kosi Bay lake system on the other. It is virtually only accessible by foot or makeshift canoes.

Former president Jacob Zuma says Wednesday's election is do or die, as he made a brief appearance at the ANC's Siyanqoba rally in Pietermaritzburg on ...
Politics
3 years ago

But all this has not deterred local residents and has not discouraged them from voting, even during the previous elections, according to IEC officials.

“No, it has not discouraged them since voters do not cross the lake to go and vote - but only IEC staff cross the lake to the voting station located within the community they are serving,” said Khanyi Ngcamu-Khanyile, an IEC official in the Umkhanyakude district in the far north of KZN.

When the 218 registered voters from the impoverished community cast their votes on Wednesday, they will be doing so with the hope it will change their lives for the better and that the various socio-economic challenges they are facing such as lack of infrastructure and other services will improve one day.

KZN and North West the 'highest-risk areas' for election violence

Police have identified KZN and the North West provinces as the highest risks for violence during next week's general elections.
Politics
3 years ago

Police minister Bheki Cele has warned KwaZulu-Natal police officers not to be tempted by unscrupulous politicians ahead of the national elections.
Politics
3 years ago

ANC secretary-general Ace Magashule has promised residents during a door-to-door campaign in northern KwaZulu-Natal during the party's final push for ...
Politics
3 years ago