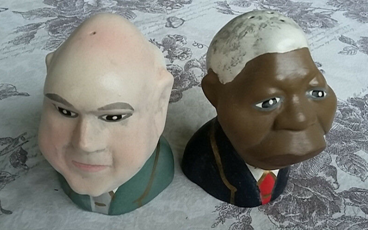 The 1994 original Baker Street designs of Mandela and De Klerk salt and pepper pots were being sold for R850.
Image: Supplied

Do you have some unwanted 1994 election memorabilia stacked away? Well, dust it off, it could be worth something.

As South Africans go to the polls this week for the country's sixth democratic general election since the end of apartheid in 1994, memorabilia from the first democratic poll are popping up for sale online.

Gumtree's Estelle Nagel said an "extraordinary range of 1994 items" were on sale.

"Most of it doesn’t have huge value yet but some of it undoubtedly will in future," Nagel said.

The 1994 original Baker Street designs of Mandela and De Klerk salt and pepper pots were the highest priced for R850.

Other items included a 1994 presidential inauguration stamped envelope for R300, original 1994 election ballot papers for R250, a set of 1994 inauguration R5 coins and a 1994 "Mandela for president" campaign badge for R94.

Bidorbuy also had a number of Mandela-related items up for sale. Mandela's phone card was offered for R1,250.

Election day: Everything you need to know to make your mark

Here's what you need to know about voting day.
Politics
3 years ago

South Africans are an impatient bunch and queues tend to chafe at our nipples. Follow these guidelines to take the sting out of standing in that ...
Lifestyle
3 years ago