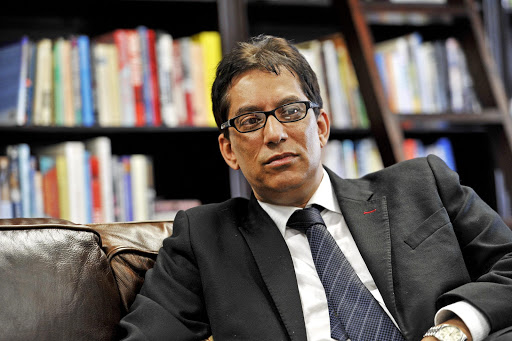 Iqbal Survé 'is appreciated as a long-serving member of the ANC ... but the reality is that his name and his company are implicated in the looting of the PIC', says the ANC provincial chairperson.
Image: Gallo Images / Foto24 / Lerato Maduna

The ANC in the Western Cape says it will return the donation it received from controversial businessman Iqbal Survé to help pay its election campaign bills. The amount was speculated to be around R1m.

Acting chairperson of the ANC in the province Khaya Magaxa said it would have been wrong for the ANC to take money from Survé and his companies while the commission of inquiry into the Public Investment Corporation (PIC) was still ongoing.

Speaking to TimesLIVE on Tuesday, Magaxa said the decision to return the donation was in line with a resolution the ANC took at its national conference in December 2017 around corruption and the integrity of the ANC for party leaders to distance the ANC from any form of donation that seems to be questionable.

"We appreciate Dr Iqbal as a long-serving member of the ANC, he is one of us, but the reality is his name and his company are implicated in the looting of the PIC," added Magaxa.

"We would be benefiting in our election campaign from that money. The PIC is pensioners' money. We can't take it."

Magaxa said they communicated their decision with provincial treasurer Maurencia Gillion to return the money with great urgency. Survé donated the money to the ANC on Sunday, saying he expected "absolutely nothing in return".

Speaking at a media briefing in Cape Town, he said the donation, made through his Sekunjalo group of companies, was to support "progressive forces".

"It's so important that we support progressive forces ... Our support for this election has got nothing to do with Independent Media. Independent Media has its own editors, its own people who are responsible, objective and do foresight into stories. Our support is because historically since before democracy, after democracy, we believe in supporting progressive forces. It's a duty, you don't have to thank us."

"I only have one condition to our support: do not give us anything in return. We want absolutely nothing in return ... Our support is unconditional. If you win whatever council or province, we don't want to see you," he said.

Survé has been at the centre of graft allegations at the PIC, with various entities linked to him allegedly having benefited from deals made outside due process.

The ANC's elections coordinator in the province, Ebrahim Rasool, speaking at the same press conference, said: "When the president called for Thuma Mina, he didn’t send a budget with him … he wanted projects and all our volunteers asked for was for some food. That's when we made contact with Sekunjalo, among others."

Magaxa claims to not have been aware of Survé's intention to donate to the ANC, adding that he had not attended the function where the donation was announced.

"It only came to my attention yesterday morning. I immediately had a lot of questions with the treasurer on why it came that way.

"I asked about the PIC inquiry and when I was told it is still an ongoing process, I called a meeting with the office bearers and Rasool, which was held this [Tuesday] morning. I told them my thinking and we decided to reverse this money," he said.

Magaxa revealed that at Tuesday's meeting, Rasool was asked to inform Survé about the party's decision to return the money.

Iqbal Survé and Gill Marcus's heated exchange at the PIC inquiry had many people talking.
News
3 years ago

Just months before one of his companies defaulted on repayments to the PIC, Iqbal Surve splurged almost R140m on seven luxury V&A Waterfront ...
News
3 years ago