Since 2016, many municipal by-elections have been decided by mere handfuls of votes.
Image: REUTERS

Since the 2016 municipal elections, there have been several by-elections that were so closely contested that the parties involved bit their fingernails down to the quick.

TimesLIVE presents the 10 closest contests of the past three years; by-elections that were decided by a handful of votes:

Dr JS Moroka is in the north-western corner of Mpumalanga, bordering Gauteng and Limpopo.

The ANC won this ward in the 2016 elections by just 57 votes, receiving 1,294 votes and 49% of the vote. The party was run very close by an independent candidate who received 1,237 votes and 47%. The ANC managed to retain the seat by an even slimmer margin – 48% of the vote to an independent’s 47%, and just 20 votes. Turnout fell slightly from 66% in 2016 to 62% in the by-election, highlighting the intense competition in this ward.

The municipality is in KwaZulu-Natal province, bordering the Free State and Mpumalanga. It contains the town of Newcastle.

The ANC faced a strong challenge from another independent candidate a month later but could not mount a second successful defence. The party won the ward in 2016 with a respectable 56% of the vote, but could only manage 47% in the by-election, falling just short of the independent challenger. Just nine votes separated the two candidates, 956 for the independent and 947 for the ANC candidate. Turnout fell from 59% to 44%.

Nquthu is in the uMzinyathi district in KwaZulu-Natal. It contains a number of rural villages.

When the Nqutu council was dissolved all 17 of its wards were up for grabs – and most of them had been won with less than 55% of the vote. The council and the municipality had been split down the middle – an IFP-led coalition matched by its ANC-led counterpart – but the new round of elections saw the ANC lose four wards to the IFP, handing a clear majority to the latter.

Ward 13 had been comfortably won by the ANC in 2016 with 63% of the vote but the IFP pipped the ANC in the by-election rerun by just 27 votes. Turnout increased across the municipality, rising in Ward 13 from 58% to 62%. 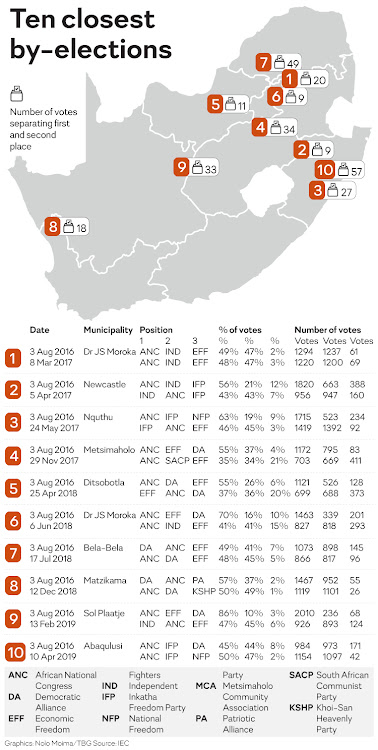 Metsimaholo is in the northern Free State, on the Gauteng border, and contains the town of Sasolburg.

The ANC lost its council majority in Metsimaholo after the 2016 elections, but a coalition of the DA, EFF, FF+ and the Metsimaholo Community Association (MCA) couldn’t agree on a municipal budget and the council was dissolved. By-elections in November 2017 were a wholesale affair, with both ward and proportional representation (PR) councillors elected on the day.

The ANC ultimately lost three PR seats to the SACP, which contested elections directly for the first time, although it stoutly defended all 16 wards it had won in 2016. Wards 3, however, was too close for comfort.

The party had won the ward with 55% of the vote to the EFF’s 37%. The party retained the ward with just 35% in the by-election as the SACP and EFF helpfully split the opposition vote. The ANC candidate outpaced the SACP by just 34 votes.

Ditsobotlo is in the North West province. It contains the towns of Lichtenburg and Coligny.

Dr JS Moroka is in the north-western corner of Mpumalanga, bordering Gauteng and Limpopo.

The ANC won this ward with 70% in 2016 but held on in the by-election by just nine votes. Following the death of the incumbent ANC councillor an independent candidate posed a strong challenge by winning 41% of the vote, almost matching the ANC. The EFF came third with 15% and 293 votes – more than 30 times the difference between first and second places.

The ANC’s victory was short-lived: the Electoral Court noticed voting irregularities and ordered a fresh by-election. This time the independent prevailed, winning by a handy 104 votes.

Bela-Bela is in the southern tip of Limpopo Province and contains the town of Warmbaths.

The DA won this ward with just 49% of the vote in 2016. With 41% the ANC wasn’t far behind, and the party won the by-election rematch by 48% to 45%. Only 45 votes separated the two parties. The by-election upset gave the ANC a bit more breathing room in a hotly contested municipality.

Matzikama is in northernmost tip of the Western Cape and contains the town of Vredendal.

The DA won this ward in 2016 with 57% of the vote (ANC 37%) but finished 18 votes behind the ANC in the by-election. The ANC received 50% of the vote to the DA’s 49%, and the result meant the DA's loss of majority in the council, forcing the party to form a coalition with the United Democrats to retain control.

Sol Plaatje is in the Northern Cape and includes the large town of Kimberley.

The ANC won control of the municipality in 2016 with a strong majority, but this was threatened when internal party divisions led to the expulsion of seven ward councillors. The ANC successfully defended six of the seven wards, but Ward 16 was retained by the expelled incumbent, now running as an independent candidate.

He received 47% of the vote to the 45% of the ANC candidate. Just 33 votes separated the two. The EFF played the part of spoiler, coming third with 124 votes.

AbaQulusi is part of inland KwaZulu-Natal. It includes the town of Vryheid.

AbaQulusi was one of a few KwaZulu-Natal municipalities where no clear winner emerged after the 2016 elections. The IFP led a coalition that included the DA and EFF, but the coalition's slim majority disappeared after a March 2019 by-election in which the ANC won a ward off the IFP, resulting in a hung council.

Two weeks later the IFP had a chance to return the favour and regain control when Ward 21 was contested. The ANC had won this ward in 2016 by just 11 votes and 45% of the vote to the IFP’s 44%.

The by-election, while still being close enough for a photo finish, turned into a much safer affair for the ANC as the party retained the ward with 50% of the vote and a lead of 57 votes. The council remains balanced between the ANC on the one side of the aisle and the IFP, DA and EFF on the other.

WATCH | Russians, Afrikaans and saluting a 'bru': 6 quirky moments from the election campaigns

But guys, this election campaign has been the most.
Politics
3 years ago

Electoral Commission (IEC) workers affiliated to the National Education, Health and Allied Workers’ Union (NEHAWU) will not be downing tools on ...
Politics
3 years ago