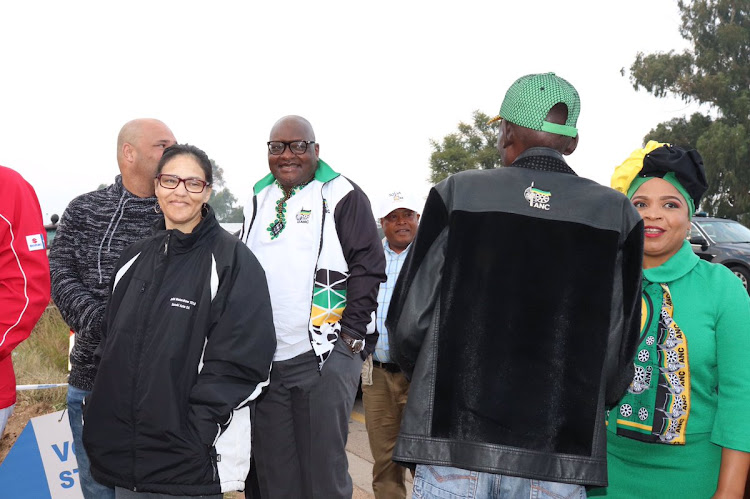 Gauteng premier David Makhura queued early on Wednesday in a growing line with other residents at the voting station where he is registered.

Electoral Commission officials at the polling station were all smiles as residents from Knoppieslaagte, outside Centurion, arrived to cast their votes in the general election.

IEC presiding officer Oleseng Itholeng said earlier that it was “all systems go”.

He said the premier "is one of 1,200 residents in the area who will be voting here”.

It's all systems go for elections, says IEC

The Electoral Commission (IEC) says it is all systems go for the sixth democratic national and provincial elections on Wednesday.
Politics
3 years ago

Makhura was spotted waiting in line, chatting to residents about their views of the elections.

Residents from Knoppieslaagte said they are impressed that a politician was prepared to wait in line like “ordinary citizens”.

“They need to know their place. They are public servants and must know you cannot jump queues,” said Portia Muthula.

“Hopefully the premier will see from this station that people want change,” she added.

Another resident, Lynda Redman, said she was excited. “The political climate is edgy in general and things have to change,” she said.

Early glitch and promise of safety

Voters at Bryanston High voting station in Johannesburg were told at 6.50am that no ballot papers had yet been delivered by the Electoral Commission and that officials hoped voting would start by 7.30am.

The glitch was swiftly resolved, though. Ballot papers arrived at about 7am, accompanied by a metro police escort. Voting opened just before 8am.

Meanwhile, Johannesburg public safety MMC Michael Sun said 3,000 metro cops were being deployed in the city. They will be spread across two shifts of 1,500 officers each to oversee traffic management and safety on voting day.

JMPD officers will remain on election duty until Thursday evening to assist with safety, traffic management at voting stations, escorting ballot boxes across the city, as well as patrolling at the provincial results centre in Auckland Park in order to mitigate any disruptions that may occur.

The city's Emergency Management Services (EMS) are also on standby to assist residents with any medical emergencies or incidents that may arise. "Our EMS members will be deployed in each region to voting stations to ensure the wellbeing of all the voters are taken care of. These trained professionals will be there to assist until the voting closes," said Sun.

With over 2,760 voting stations in Gauteng, measures have been put in place to combat possible security breaches, such as intimidation of voters and electoral officers; obstruction of voting and the voting process; public violence and malicious damage to property; and theft or common robberies at or near voting stations.

May all citizens cast their vote in a spirit of reverence for this right, charity for those they disagree with,
and concern for the good of all as we strive for a more perfect and peaceful union. #SAElection2019

Parents are standing in the queues with their children. @IECSouthAfrica officials have made provisions for parents with smaller babies to sit next to the tents at the Vosloorus Phaphadikota voting station. @WitsVuvuzela #08May #ElectionDay #Elections2019 #SAElections2019 pic.twitter.com/WScxSJO11t

Many South Africans woke up bright and early on May 8 2019 to cast their vote at their designated stations. We kept up with the thumb pictures on social media and decided to share some.

For the latest news, analysis and opinion on the 2019 national elections
Politics
3 years ago

Stay in the know: All the news, opinion and analysis around the SA 2019 general elections - as it happens!
Politics
3 years ago

A starter pack for first-time voters at the 2019 elections