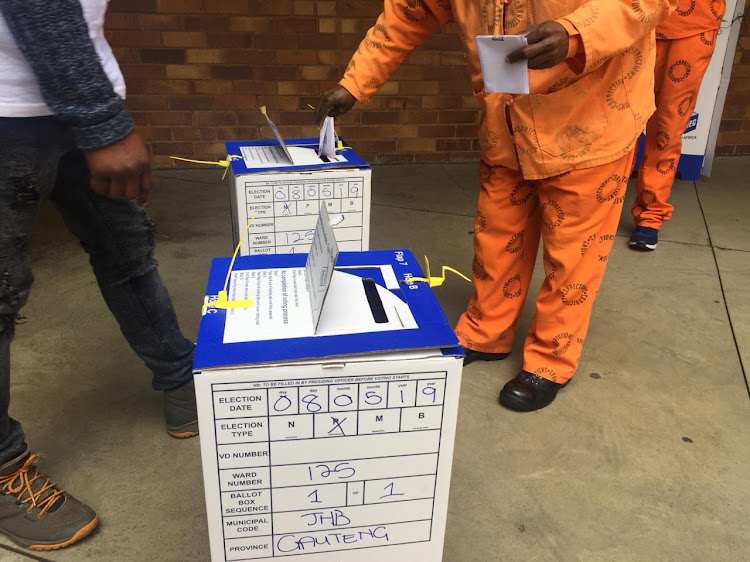 The excitement was palpable at the Johannesburg Prison on Wednesday as inmates cast their votes for the national and provincial elections.

Bongani Mabena, 44, who is serving a life sentence at the jail commonly known as "Sun City", says it is important for prisoners to have a say in who will lead the country.

“Prison is a community in itself. Inmates should be given a right to vote because after serving their time they will be reintegrated into the community,” he said.

“I appreciate if we give the government a chance, because there are things that cannot be done overnight.”

Another inmate, Mosutho Maleka, said he has been in prison for six years. The 30-year-old first-time voter had a big smile on his face after making his mark.

"It is quite a privilege to vote today. At least we can also vote and be happy," he said.

"I want government to do so much. The likes of corruption needs to be dealt with. They should deliver as promised - or at least try."

Maleka said he is hoping to run his own business after he gets out of prison.

Dumisani Nyembe, 35, also a first-time voter, has two years left to serve in prison. He said he is hoping to open a chicken farm when he gets out.

"I hope government will change corruption and all the bad things. They should also create jobs," he said.

Itumeleng Sibenya said he was hoping to be released from prison by the end of the year.

The 51-year-old said he was currently involved in a non-profit organisation called "Fear Free Life".

"We are addressing crime and gangsterism in prison and the community."

Sibenya they hoped for change when a new government is elected.

"We hope changes will be soon, and felt," Sibenya said.

By midday on Wednesday, 270 prisoners had voted.

Correctional services spokesperson Singabakho Nxumalo said it was "all systems go" as more prisoners made their way to the voting booth.

Nxumalo said over 11,000 prisoners had registered countrywide to vote.

"We are satisfied with the progress as the Electoral Commission (IEC), working closely with DCS officials, managed put in place arrangements that will ensure that registered inmates make their mark without any form of hindrance.

"Inmates are definitely excited and they fully understand the voting process. The party agents are also on-site in order to monitor the voting," Nxumalo said.

Meanwhile, at Westville Prison in Durban, voting had to be delayed after electoral officials failed to arrive timeously. According to IEC figures, about 813 inmates are registered to vote across the prison’s five sections.

Thirty-three-year-old East London resident Nomfundiso* will not be voting on Wednesday. Not because she doesn’t want to, but because a loan shark has ...
News
3 years ago

Story of two gogos: one still prepared to wait, the other fed up after 25 years of promises

Despite a dilapidated three-roomed house, constant load-shedding and a sewage spill across the yard, a 74-year-old Kliptown resident said she was ...
Politics
3 years ago