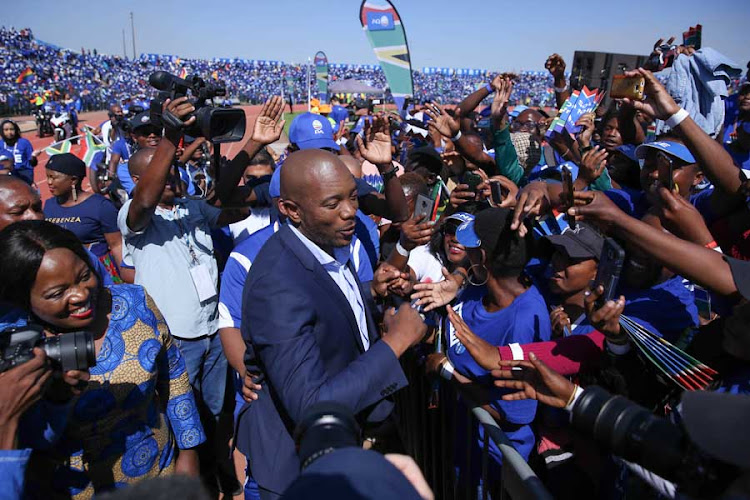 DA leader Mmusi Maimane held his party's final election rally at Dobsonville stadium in Soweto earlier this year. The DA has been scathing about Cyril Ramaphosa's decision to hold his presidential inauguration at Loftus stadium in Pretoria.
Image: Simphiwe Nkwali

The Democratic Alliance is sending a small delegation to President Cyril Ramaphosa’s inauguration in Pretoria on Saturday.

The party has criticised the government for spending millions of rand on the event while millions of South Africans are unemployed.

DA chief whip John Steenhuisen told TimesLIVE this week that only a handful of DA members, including party leader Mmusi Maimane will attend the event. Parliament had invited all MPs to attend the inauguration and booked hotel accommodation for those who are based outside Gauteng.

But the DA declined the invitation.

Steenhuisen said they informed parliament on Sunday that its MPs will not be needing the accommodation.

“Only MPs and MPLs who are based in Gauteng – provided that no money is spent on transport and accommodation for them – will attend,” he said.

Steenhuisen said the DA had 24 MPs (including NCOP members) who were based in Gauteng and that not all of them would be going.

“We thought that given the R150m expenditure, and given the current fiscal space, this was just not a good start to tighten up on government expenditure.

“I know they say it won’t cost the same as the last time, but SA’s fiscal space is in a different place than it was when Zuma was first inaugurated. Now 10 million people are unemployed.

“This is essentially turning into a coronation ceremony rather than what it should be and in the same year that you are going to have two state of the nation addresses. It’s too much money for politicians to be spending on events that they get to swan around in fancy outfits,” he added.

Steenhuisen is among those DA MPs who will not attend the inauguration. “I will not be going; I find it hypocritical to call out the costs and still attend.”

He said Maimane would attend because he was leading the DA delegation.

The former DA leader says she is fighting against identity politics. Ironically, her fightback strategy is actually supporting it, writes Max du Preez
Ideas
3 years ago

DA national campaign manager Jonathan Moakes has emerged as the first casualty of the party's fallout over its poor results in the May 8 elections.
Politics
3 years ago