Zuma is 'feeling very bad' about corruption case against him 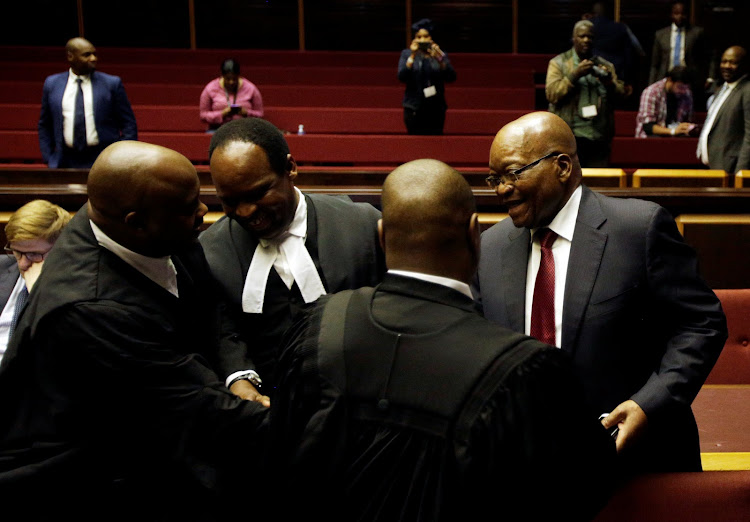 Former South African President Jacob Zuma speaks to his legal team in court where he is facing charges that include fraud corruption and racketeering in Pietermaritzburg, South Africa, May 24, 2019.
Image: Themba Hadebe/Pool via REUTERS

Former president Jacob Zuma’s lawyers portrayed him as a financially drained, hated and ashamed man in court this past week, saying the drawn-out court matter against him was taking its toll.

But Zuma appeared confident as he arrived at the Pietermaritzburg High Court every day in a dark luxury vehicle marked “presidential protection”, as supporters jostled to catch a glimpse of him.

In court, the aging former statesman was described as a hated man with a ruined reputation who was being denied the right to a fair trial.

"We sometimes forget that Mr Zuma is a human being. He is a grandfather. He is a father. He is a brother. He has got the same feelings that we all do. Because he has been dirtied over decades with allegations that he is corrupt some of us see him as less of a human. He is feeling very bad about the continuation of this matter. He has shame and pride," his attorney, Daniel Mantsha, told TimesLIVE on Friday shortly after arguments in Zuma's application for a stay of permanent prosecution ended.

But Zuma didn’t appear ashamed as he walked confidently into court on Monday morning where his son Duduzane - who is fighting his own legal battles in a culpable homicide case - sat in the public gallery with some of his father's staunchest allies like Carl Niehaus and Black First Land First leader Andile Mngxitama.

He displayed the same confidence when he walked out of court on Friday after his advocate, Muzi Sikhakhane, argued to introduce a letter written by former prosecutions boss Shaun Abrahams which Zuma believes would help him to avoid facing 16 charges that include fraud‚ corruption and racketeering.

"We hope that the court will read the letter and see it for what it is. It is black and white. It is coming from the National Prosecuting Authority, not from us. They, themselves believe that there is political interference. That is why they directed the Hawks to investigate certain prominent politicians, not only for political meddling but for corruption and racketeering," Mantsha said.

He argued that the state could not deny that there was political interference when, as late as March 2018, Abrahams was asking the Hawks to investigate claims made by former Thales lawyer Ajay Sooklal that Mbeki had allegedly instructed Maduna to drop the charges. Sooklal claimed that Maduna was allegedly paid €50,000 to for his part in dropping the charges.

NPA senior counsel Wim Trengove argued that the letter had nothing to do with Zuma's case and therefore it should not be introduced in his bid to escape facing corruption charges.

Thales is accused of agreeing to pay Zuma an annual R500,000 bribe for protection from an investigation into the controversial multi-billion rand arms deal. The alleged bribe was facilitated by Zuma’s former financial adviser‚ Schabir Shaik.

Trengove accused Zuma's legal team of obtaining the letter unlawfully as the document was privileged.

Trengove told the court that it must have been leaked from the NPA or Hawks and asked the court not to allow Zuma's legal team to submit the letter.

While judges Bhekisisa Mnguni, Thoba Poyo-Dlwati and Ester Steyn deliberate over both applications over the next three months, Zuma's legal team plans to release more evidence to show that the NPA is "untruthful".

As Zuma took the stage to address his supporters on Friday afternoon, Mantsha said: "Wait and see."

"They are many documents that are going to come into light in a few days and weeks in respect that the NPA has been untruthful,” said Mantsha, who did not want to say when and how these documents had come into the Zuma camp’s possession.

“We have to make further applications. We will do whatever we have to do in terms of our laws, to bring those to the attention of our courts.”

Former president Jacob Zuma has snubbed the inauguration of his successor, Cyril Ramaphosa, which is currently under way in Pretoria.
Politics
3 years ago

Zuma wields Abrahams letter to get him off the hook

Jacob Zuma’s lawyers are fighting to introduce a letter – understood to have been written by former prosecutions boss Shaun Abrahams shortly after he ...
News
3 years ago