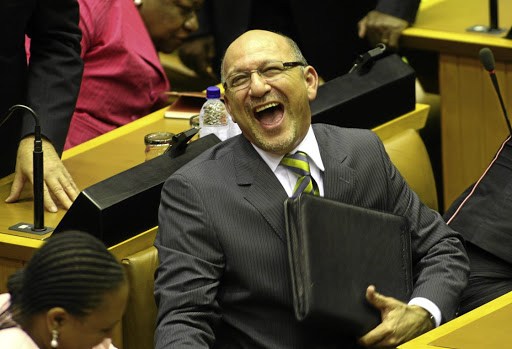 A reasonable person of ordinary intelligence would understand the tweet issued by the EFF in March to mean that former finance minister Trevor Manuel was corrupt and nepotistic.

The reasonable reader would also understand the tweet to mean Manuel conducted the appointment of new SA Revenue Service (Sars) commissioner Edward Kieswetter secretly in a deliberate attempt to disguise his familial relationship with Kieswetter.

This was part of the explanation given by the high court in Johannesburg on Thursday as it held that the statements in a tweet issued by the EFF about Manuel were defamatory and false. The court also said the EFF had not shown that the publication of the statements lacked wrongfulness.

Manuel went to court in response to a statement on March 27, shared on the party's official Twitter account, accusing him of nepotism and corruption in influencing the appointment of Kieswetter. Manuel chaired the selection panel which interviewed the shortlisted candidates for the job.

Responses continue to flood Twitter as people weigh in on the EFF vs Trevor Manuel defamation battle.
Politics
2 years ago

Manuel had, however, recused himself when Kieswetter was interviewed because Kieswetter was Sars deputy commissioner at the time that Manuel was the country's finance minister.

In its judgment on Thursday, the court ordered the EFF, its leader, Julius Malema, and the party’s spokesperson, Mbuyiseni Ndlozi, to pay Manuel R500,000 in damages for the defamatory and false statements.

Matojane said the sting of the charge in the EFF statement, that Manuel was nepotistic and corrupt, had not been shown by the EFF to be true.

He said the EFF, in its defence, only raised concerns about the lack of transparency in the appointment process, concerns about state capture and the dismissal of former Sars commissioner Tom Moyane.

“All these are peripheral facts which are unrelated to the sting of the defamatory statement in respect of Mr Manuel,” Matojane said.

Two conflicting values were at stake in the matter - the freedom of expression and the right to dignity, which included the right to reputation, he said.

EFF: Cabinet an insult to the intelligence of South Africans

The EFF has described the new national executive announced by President Cyril Ramaphosa as an "insult to the intelligence of South Africans".
Politics
2 years ago

“The challenge for the courts has been to strike an appropriate balance between these rights in articulating the common law of  defamation,” Matojane said, adding that Manuel had a clear right to protect his dignity and reputation.

Matojane decided in his judgment that the matter should be heard on an urgent basis.

He said Manuel had suffered and continued to suffer harm to his reputation, both in his personal and professional capacity, through the widespread dissemination of the statement.

“He has no alternative remedy to the persisting injury, as the [EFF, Malema and Ndlozi] have refused to apologise or to take down the defamatory statement from their social media platforms,” Matojane said.

There was also ongoing harm to the well-being of the country as the public laboured under the misapprehension that Sars was led by a person who was appointed for nepotistic and corrupt reasons, he said.

The EFF had, said Matojane, submitted that by accepting an appointment to chair the panel for the appointment to an organ of state as contested as Sars, Manuel had thrust himself “in the political eye” and must consequently display a greater tolerance to criticism than ordinary private individuals.

“There is no merit in this submission, as high-profile public office bearers are also entitled to a right to dignity and to not having their reputations unlawfully harmed,” Matojane said.

The EFF is planning to appeal the judgement.

The luxurious Oyster Box Hotel - the chosen venue of international stars visiting Durban - secured an urgent interim interdict against the EFF on ...
News
3 years ago