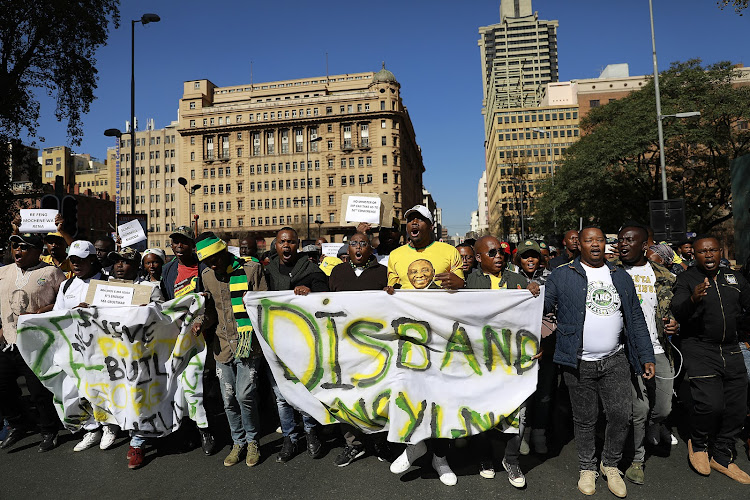 A group of ANC Youth League (ANCYL) members calling themselves the "Revived ANCYL Movement" on Tuesday picketed outside the ANC's Luthuli House headquarters in the Joburg CBD.

The youth league members were demanding the disbandment of the Collen Maine-led national executive committee (NEC).

The group are arguing that the incumbent leadership structure's term expired last year and are calling for a fresh elective conference to elect new leaders.

Their demand to meet with ANC secretary-general Ace Magashule fell flat. The ANC NEC member Dakota Legoete and MK Military Veterans spokesperson Carl Niehaus came out to speak to them but were sent packing.

Even ANC spokesperson Pule Mabe's attempt to reason with the protesters that their concerns were being addressed were unsuccessful.

"Last week we received a memorandum from comrades who had come to St George's Hotel and we submitted the same to the leadership," said Mabe.

A member of the troubled African National Congress Youth League (ANCYL) has instructed his lawyers to demand that the ANC national executive ...
Politics
3 years ago

"We can report to you that tomorrow the SGO [secretary-general's office] together with the team of the NEC that was put up to attend to matters of the youth league will be meeting to get a brief from the ANCYL itself to get a picture of what is happening to make sure that issues of congress are addressed.

"We can assure you that issues that have been brought forward are being attended to and you, comrades, also have to acknowledge that we had a three-day NEC lekgotla that ended yesterday and we are only coming to Luthuli House today and our first call of duty was to make sure that we sanction a meeting to attend to matters of the youth league."

Mabe said Magashule could not meet with the disgruntled group due to "prior commitments".

The group said they were not leaving the Luthuli House precinct until Magashule met with them, and were still picketing outside when the ANC held a media briefing on the outcome of its NEC lekgotla.

Cyril Ramaphosa appointed a few young people to his cabinet this week. Zingisa Mvumvu takes a look at some interesting new names
News
3 years ago

The ANC Youth League (ANCYL) in the Free State says it is forging ahead with its plan to hold a book burning event in protest against the book ...
Politics
3 years ago