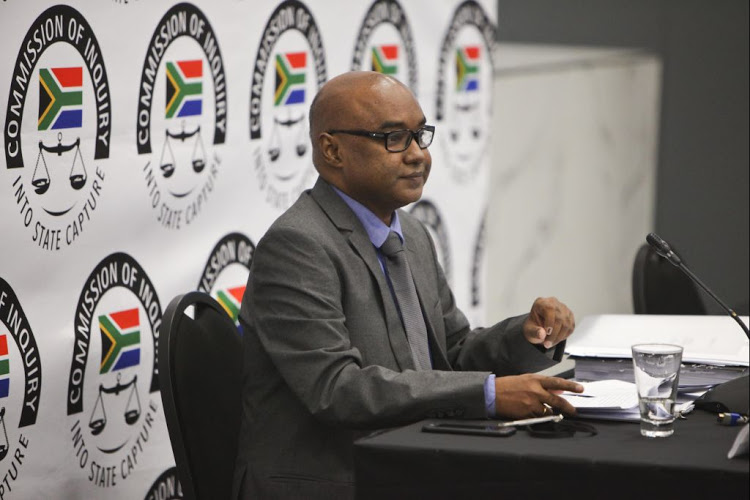 Rajesh Sundaram described the working conditions of the Indians who built the ANN7 television studio as sub-human. 'They would work 24 hours a day, with just a bag of rice to eat,' he told the Zondo inquiry.
Image: Alaister Russell/The Sunday Times

Rajesh Sundaram, the former editor of ANN7, the Gupta-owned TV news channel, testified before the state capture commission this week, leaving no stone unturned on the alleged involvement and influence of politicians in the channel.

Sundaram told the commission that the SABC exposed itself to exploitation when it gave archival footage to ANN7 without having a monitoring system which would determine how much money was owed to the broadcaster, based on footage used.

He said he knew about this deal from businessman Laxmi Goel, who he claims described it as a "sweet deal" between the SABC and ANN7.

"He said 100 hours of footage would be given at throwaway price and described it as peanuts."

He further alleged Nazeem Howa, the CEO of the Gupta-owned holding company Oakbay, boasted about having the blessing and backing of former president Jacob Zuma.

Gupta television station ANN7 enjoyed a discounted rate when it purchased archive footage from the SABC before its launch in 2013.
Politics
3 years ago

"I handed the documents to [businessman Laxmi] Goel, who handed them to Mr [Ashu] Chawla. Everything I read on the internet and the time it would take for visa processing were bypassed."

Before former ANN7 consulting editor Rajesh Sundaram testified at the state capture inquiry about the inner workings of the Gupta family's propaganda ...
Politics
3 years ago

Former president Zuma was allegedly heavily involved in the building of the station from the ground up, so much so that Sundaram said Zuma even named the station.

"Ajay was telling the president that we are calling it ANN just as Zuma suggested, he seemed to appreciate that." Sundaram said the "7" was added because there was already a news channel with the name ANN.

Former president Jacob Zuma allegedly played an integral part in establishing Gupta propaganda machine ANN7, signing off on its name and logo - even ...
Politics
3 years ago

Sundaram alleged that employees who constructed the channel's studios were flown from India because they were "cheaper than South Africans". Sundaram also described their working conditions as sub-human and said they would work 24 hours a day, with just a "bag of rice to eat".

"The idea was to get a bunch of people from India, and not South Africa, before the launch."

SABC and home affairs 'got away with crime'

Sundaram wrote a book titled Indentured: Behind the Scenes at Gupta TV, which detailed what was happening at the Gupta channel.

He claimed that the scores of the Indian employees who constructed the ANN7 studios were working on tourists permits, a concern which he claimed to have raised with the department of home affairs, but has received no response, six years later.

'It was the most depressing time of my career': Rajesh Sundaram's damning testimony in five quotes