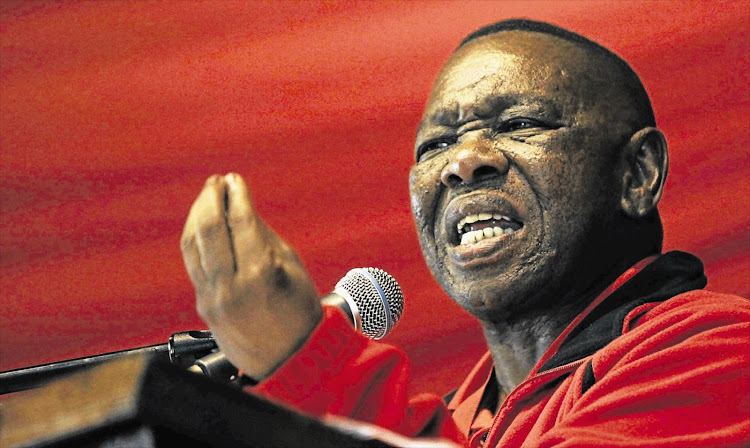 SACP general-secretary Blade Nzimande says Busisiwe Mkhwebane has politicised the office of the public protector and turned it into a 'party political battlefield'.
Image: TEBOGO LETSIE

The SA Communist Party (SACP) has taken aim at embattled public protector Busisiwe Mkhwebane, calling for a parliamentary inquiry into her fitness to hold office.

This after the party's central committee held a plenary session this weekend.

SACP general-secretary Blade Nzimande said the party was of the view that Mkhwebane had politicised the office and turned it into a "party political battlefield".

According to Nzimande, court rulings against Mkhwebane over her reports on the SA Reserve Bank and the Estina dairy farm saga were enough grounds to question the incumbent public protector's fitness.

An investigation by the public protector's office into the Financial Services Board (FSB), following the stripping of pension fund surpluses in a ...
News
2 years ago

To this end, said Nzimande, parliament should settle the matter and also emphasise the role of the office which they believe Mkhwebane does not understand.

"Unfortunately the office of the public protector, instead of being preoccupied with defending the poor and vulnerable, has become an instrument of the better-off in society to fight political and other battles," said Nzimande.

"It is for these reasons that the SACP is seriously concerned about the constant scathing court judgments against the current public protector Busisiwe Mkhwebane. The SACP therefore believes that it is imperative for parliament to carry out an inquiry into her suitability to hold this important office.

"It is not because we have a personalised agenda against her, but the court judgments have the potential to damage the standing of this office.

"We even hope an inquiry like this will clarify and anchor the office of the public protector better."

Nzimande also criticised ANC factions engaged in a debate about the role of the SA Reserve Bank for their opportunism and "vulgarism".

Saying the stance of the so-called radical economic transformation (RET) on the matter was meant to collapse the bank, he lashed out at the neoliberals for selective quoting of the constitution on the matter.

Nzimande said the the central committee called for a sober debate on the matter of the central bank.

ANC secretary-general Ace Magashule, accused of "misrepresenting" the party's stance on the Reserve Bank, is likely to be put on a tight leash ...
Politics
2 years ago

Said Nzimande: "The radically sounding slogans on the Reserve Bank and monetary policy by the spurious RET and state-capture fightback agenda networks are aimed at nothing but the weakening of the Reserve Bank's capacity to monitor and control outward illicit capital flows headed for places like Dubai.

"However, exposing and tackling the spurious RET agenda must, on the other hand, not be allowed to be hijacked and diverted towards support for the arrogant, know-it-all neo-liberals and their advocates who are oblivious to the necessity to have the Reserve Bank's mandate to explicitly target employment creation."

Meanwhile, the public protector on Sunday "noted with concern" claims contained in a news article "based on a document purported to be a preliminary report" of her investigation relating to a Bosasa donation to Cyril Ramaphosa's 2017 presidential campaign.

According the article, the document in question was accessed "courtesy of one of the president's confidants".

Mkhwebane said in a statement that she and her office will not comment on the contents of any news report or leaked document that purports to be hers as that could potentially jeopardise her investigations and prejudice the subjects of the probes.

You can bank on the Bank, says Cyril amid confusion

President Cyril Ramaphosa has assured citizens and investors that his government has no intention to tamper with the mandate of the SA Reserve Bank ...
Politics
2 years ago

ANC secretary-general Ace Magashule, accused of "misrepresenting" the party's stance on the Reserve Bank, is likely to be put on a tight leash ...
Politics
2 years ago

Finance minister Tito Mboweni has again rubbished a statement by ANC secretary general Ace Magashule that the mandate of the SA Reserve Bank is to be ...
Politics
2 years ago