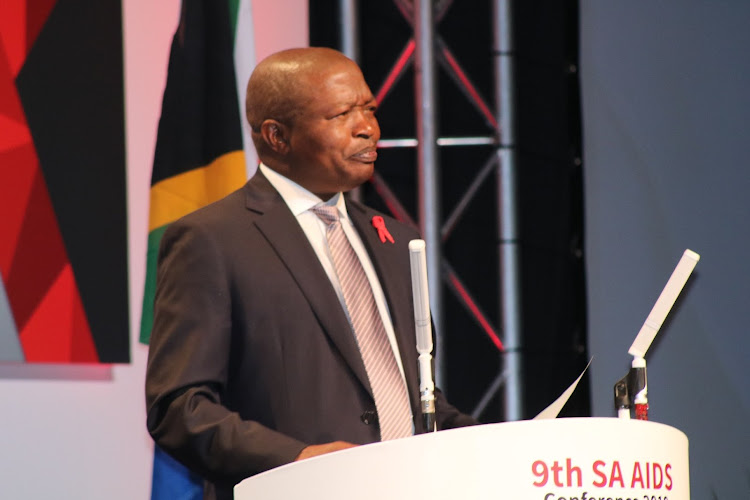 Speaking at the 9th SA Aids Conference in Durban on Friday, deputy president David Mabuza said the government will focus its efforts on preventing the transmission of HIV among women and children.
Image: Twitter/eThekwini Municipality

Deputy president David Mabuza said the main contributing factor for SA not reaching its  targets in combating HIV remains the challenge of stigma and discrimination.

Mabuza was addressing hundreds of scientists and researchers at the closing plenary of the 9th SA National Aids Conference at the Inkosi Albert Luthuli International Convention Centre in Durban on Friday.

Does SA’s top contraceptive increase HIV risk? At last we know the answer

For almost 25 years, scientists and policymakers feared an injectable contraceptive used by millions of women made it easier for them to contract ...
News
1 year ago

Mabuza said that SA, which has one of the highest rates of HIV infections in the world, has about 7.4 million HIV-positive citizens.

"We currently have 4.9 million people living with HIV that are on treatment. We need to initiate another 2 million on ARVs by December 2020."

He said the government would be focusing on the transmission of the virus in women and children.

"Our learners, especially adolescent girls and young women, will be getting focused attention from our government. This entails a holistic approach to sexuality, starting from age-appropriate life skills education in schools, so that young people have an understanding of their own bodies.

"We are approaching this work with utmost care and caution, so that we do not prematurely sexualise our children. It's important to gradually gravitate to that point where we talk about these things with our young people."

Deputy President David Mabuza has called on South Africans to stop stigmatizing and discriminating against those infected with #HIV during his closing address at #SAAIDS2019 in Durban @TimesLIVE pic.twitter.com/AcBO5M8Blc

He said the government had recently made all menstrual products VAT-free.

He said equal attention needed to be paid to young boys to prevent early exposure to HIV and other sexually transmitted infections.

"Of concern is that the age of the first sexual debut among young boys is decreasing, thereby making them vulnerable to this epidemic. We must ensure that young boys do not become fathers without planning."

He said the country's premiers and mayors would be held accountable for the performance of HIV/Aids councils in the provinces and municipalities they lead.

Earlier, the CEO of the SA National Aids Council (Sanac), Dr Sandile Buthelezi, said that gender-based violence, unemployment and substance abuse were some of the main reasons SA had not been on target to reach its 2020 goal of reducing HIV infections.

Half a million adults in Johannesburg are HIV-positive - new study

President Cyril Ramaphosa and Deputy President David Mabuza on Tuesday received a report on land reform from an advisory panel appointed in September ...
Politics
2 years ago