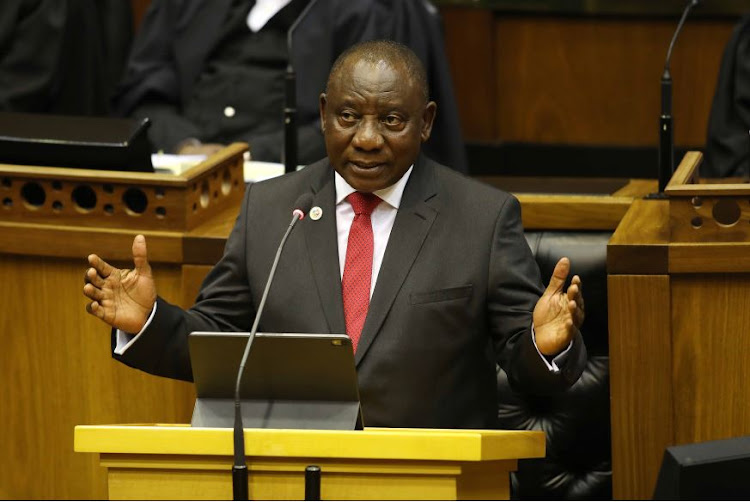 President Cyril Ramaphosa during his state of the nation (Sona) address in Cape Town on Thursday.
Image: Esa Alexander

The FW de Klerk Foundation has come out in support of President Cyril Ramaphosa's 2019 state of the nation address, commending his stance on the role of the Reserve Bank, among other "significant" elements in the speech.

"For us the most significant elements in President Ramaphosa's Sona speech last night were a strong reaffirmation of the National Development Plan, an unambiguous reaffirmation of the Reserve Bank's constitutional role to protect the value of the rand in the interest of balanced and sustainable growth; and a brief reference to the core question of land reform …" the foundation said in a statement.

However, the foundation slammed Ramaphosa's plans to deal with several issues the country faced, describing them as "imaginative initiatives".

It said Ramaphosa's solutions to rescue embattled state-owned entities including Eskom;  attract investment; introduce a world-class visa regime to help double tourist arrivals by 2030; initiatives to bring down the cost of data; steps to improve basic education and reading skills; and decisive steps to end state capture and fight corruption, were unrealistic.

Ramaphosa presented his hour-and-a-half address in parliament on Thursday, with many political parties describing it as a "wish list".

"In his address President Ramaphosa identified virtually all the major challenges that confront South Africa 25 years after the establishment of our new society. The list is as long as it is depressing: unemployment - particularly among the youth; inequality; an economy that is growing at a lower rate than our population; the ravages of state capture and corruption; rampant crime; dysfunctional state-owned enterprises - including, most notably, Eskom, with its R420bn debt."

The foundation said it had hoped the president would call for legislation that would accelerate the transfer of title deeds to 7.5-million black households who own their own homes.

"Possession of title deeds could, at a stroke, free up assets to the value of an estimated  R1.5-trillion in the hands of black South Africans and could do more to transform South Africa than any other single initiative," said the foundation.

The foundation called for unity. "All South Africans of goodwill should rally around the president in this epic struggle. In a very real sense, the future of all of us will depend on the outcome."

President Cyril Ramaphosa will present his state of the nation address (Sona) on June 19 2019 and Mzansi is divided.
Politics
3 years ago

WATCH | What Mzansi wants from Sona: jobs, land and funding for small businesses

President Cyril Ramaphosa has his hands full ahead of his Sona address on Thursday evening as South Africans share their concerns on Twiter.
News
3 years ago

Young people have shared with President Cyril Ramaphosa some of the challenges they currently face living in South Africa, ahead of his State of the ...
News
3 years ago

SA’s municipal workers are “preparing for war”.
Politics
3 years ago