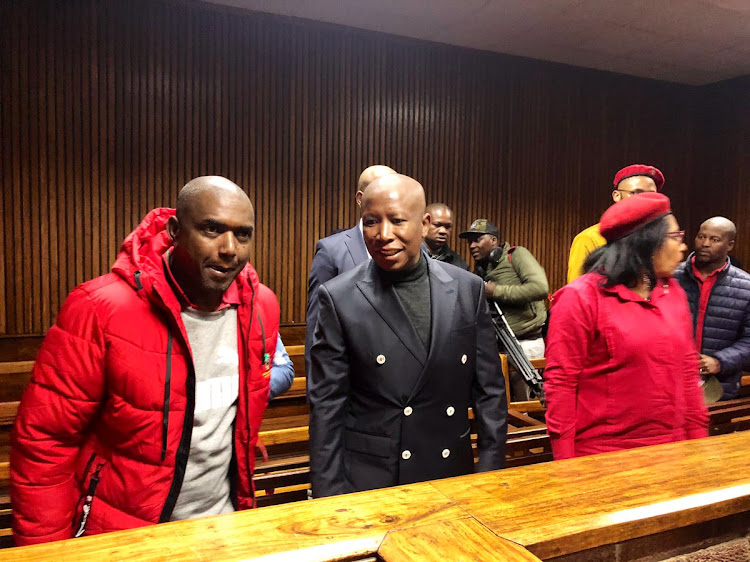 Economic Freedom Fighters leader Julius Malema appears in the Bloemfontein Magistrate's Court on a charge related to his remarks on land grabs.
Image: EFF via Twitter

EFF leader Julius Malema appeared in the Bloemfontein Magistrate's Court on Friday in connection with an alleged contravention of the Riotous Assemblies Act.

He allegedly incited his supporters to invade land in 2014‚ during a speech at the EFF’s elective conference in Bloemfontein.

The case was postponed to November 8, to allow for a finalisation of Malema's challenge of the Riotous Assemblies Act at the Pretoria High Court.

Malema filed an application to the high court in December challenging the constitutionality of the laws used to charge him. Judgment was reserved.

Party supporters accompanied Malema to court on Friday, rallying outside the building during his appearance. Addressing the group after the case was postponed, he used the occasion to reiterate the party's demand for land expropriation and criticised President Cyril Ramaphosa as a "dreamer" following Thursday's state of the nation address.

In February, Malema also made swift work of his appearance at the Newcastle Magistrate's Court on a similar charge. The case was also postponed as a result of the high court matter.

The EFF, meanwhile, has been issued with cost orders following court battles since March 2017, in AfriForum's favour. In one matter, the high court prohibited the party from inciting people to illegally occupy or trespass on land.

Julius Malema’s advocate has argued that the EFF leader is being deliberately targeted for criminal prosecution under apartheid-era laws for ...
Politics
3 years ago

EFF leader Julius Malema and his party have paid two of the five court cost orders obtained against them by AfriForum following a second payment of ...
Politics
3 years ago

The National Prosecuting Authority says EFF leader Julius Malema’s call for people to occupy land constitutes “incitement to break the law” and could ...
News
3 years ago