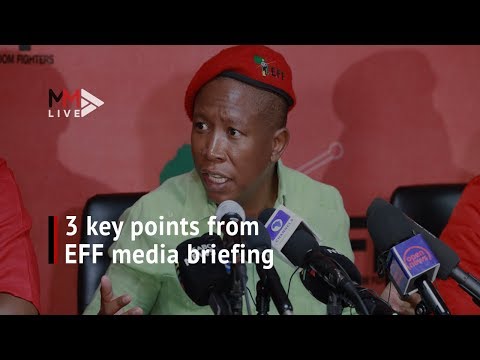 EFF leader Julius Malema has accused ANC treasurer-general Paul Mashatile of taking advantage of the courts after they ruled against the EFF for having defamed former finance minister Trevor Manuel.

Malema made the comment after Mashatile served the EFF with a summons for claiming that he stole the money meant for the Alexandra Renewal Project.

Malema said Mashatile was a "cry baby, because all he had to do was dispute their claims and provide evidence to the contrary - instead of dragging them to court.

Mashatile has filed a defamation lawsuit against the red berets seeking damages to the tune of R2m.

Said Malema: "I am disappointed in Mashatile, who has given summons here for having said he knows the story of Alexandra Renewal Project. The reality is that Paul knows where the money went - he was the leader of the ANC and he was in government.

"He must just explain. But because these courts have created an environment where political speech can be suppressed, we are going to see a festival of these things."

The EFF loss to Manuel came with damages amounting to R500,000.

Malema said the ruling had emboldened politicians the EFF criticised in the political arena to be under the impression that the courts would also rule in their favour.

"The courts have taken a decision to suppress political speech in South Africa. When we say you are corrupt you know where the money is because there are no services to the people of Alexandra, you must come and say, 'You are talking nonsense, here is where the money went, we have built the roads, we have built for so much', and all of that and get out of it," said Malema.

"I thought Paul was bigger than that takes advantage because he can see that the courts are there for the taking and thought 'hey, I can also get something, maybe let me go fetch my R500,000 as well' from the funny courts of South Africa."