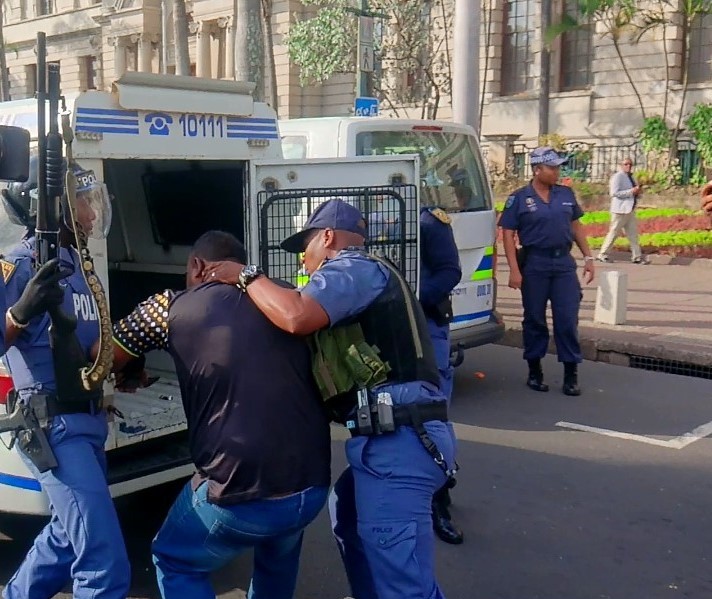 A supporter of embattled eThekwini mayor Zandile Gumede resists arrest during a protest in Durban on Thursday.
Image: Orrin Singh

Nearly 30 supporters of embattled Durban mayor Zandile Gumede have been arrested following a day of violent clashes with police.

Provincial police spokesperson Colonel Thembeka Mbele refuted claims that seven protesters arrested outside the city hall and charged with public violence earlier in the day had been released.

"The seven who were arrested this morning are still in the cells," she said.

A supporter of embattled eThekwini mayor Zandile Gumede was injured when police used rubber bullets and teargas to disperse an unruly crowd - for the ...
News
3 years ago

Meanwhile, Mbele confirmed that 22 others were arrested later in the afternoon after another confrontation between protesters and police at Gugu Dlamini Park in Aliwal Street.

Police are believed to have used rubber bullets, teargas and stun grenades to disperse a large crowd of supporters of the mayor, whose 30-day leave of absence was on Wednesday extended by the ANC pending the outcome of an investigation into a R208m Durban Solid Waste tender.

Gumede's supporters are now calling on the ANC national office to intervene and heed their demands for her to be allowed to return to work.

They claim their calls have fallen on deaf ears at provincial level and are requesting that the party's general secretary, Ace Magashule, address them.

Hundreds of supporters of embattled eThekwini mayor Zandile Gumede have regrouped and gathered outside the ANC's offices in Durban following clashes ...
Politics
3 years ago

Police arrested eight people at a protest outside the Durban city hall on Thursday.
Politics
3 years ago