Public enterprises minister Pravin Gordhan had to be whisked away from the podium as EFF MPs charged towards him in attempt to prevent him from delivering his departmental budget speech in parliament on Thursday.

In a rowdy session that mirrored sittings of the fifth parliament under former president Jacob Zuma, 22 EFF MPs, led by  one of their seniors, Sam Matiase, declared from the outset that they would not allow Gordhan to deliver his speech. 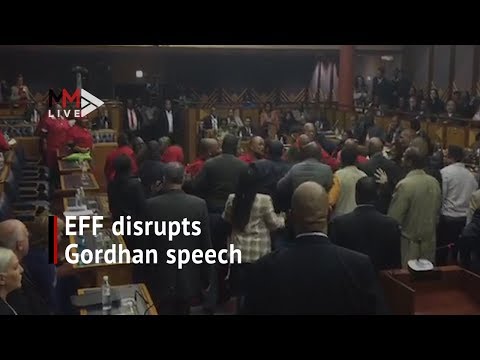 They argued that Gordhan should not be allowed to deliver his speech, saying he was a "constitutional delinquent" following damning findings against him by Public Protector Busisiwe Mkhwebane.

But House chairperson Grace Borotho rejected their point of order.

EFF MPs would not back down and moved towards Gordhan when they were ordered to leave the house. ANC MPs whisked Gordhan away to safety.

They were eventually forcefully removed by members of the parliamentary protection services, and their behaviour will now be referred to the powers and privileges committee for disciplinary proceedings.

After about 20 minutes, an unharmed Gordhan delivered the budget speech.