Day 3 of Jacob Zuma testimony at the state capture inquiry 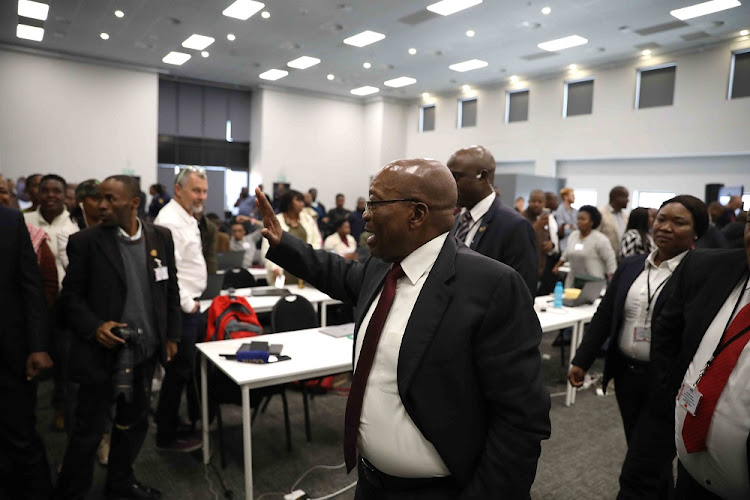 Jacob Zuma at the state capture commission. He said he had a problem with the evidence leader's line of questioning.
Image: Thulani Mbele

The fate of former president Jacob Zuma's testimony before the state capture inquiry has been left up in the air - the commission now adjourning until Friday to allow for Zuma's legal team and that of the commission to come to an agreement on how to proceed.

This came after Zuma, during his third day before the commission on Wednesday, said he had a problem with the commission's evidence leader Paul Pretorius' line of questioning.

Zuma was being quizzed on allegations by former public enterprises minister Barbara Hogan that he, in 2009, insisted on the appointment of Siyabonga Gama as Transnet chief executive. The commission was asking Zuma questions about the normal procedure when it comes to the appointment of executives at state-owned entities.

"I am being made to go through the details that are the details of the officials and expected to remember every other detail on work that is generally done by director-generals and officials. I am not an officer or cabinet secretary. The manner in which I am being asked questions on the details that I can’t even remember properly because I was not working on those details," Zuma said.

His lawyer, Muzi Sikhakhane, then jumped in.

"I have a view that my client was brought in here under false pretences and I need him to make up his mind if he wants to be cross-examined. Now it’s clear to me he is being cross-examined on what people say," he said, requesting an adjournment.

After the adjournment, which lasted about an hour, commission chair judge Raymond Zondo adjourned the proceedings until Friday.

"There were still discussions that were going on. As you know we adjourned because the former president had expressed certain concerns with regard to the details or questions that he was being asked, and his counsel (Sikhakhane) expressed those concerns as well and requested an adjournment so that the former president and his legal team could reflect on the situation," Zondo said.

"Both sides made certain suggestions which I have agreed to. This commission would like to make sure that, as far as possible, it takes everybody on board.

He said he is confident that a resolution will be found.

"It has been decided that we should adjourn the proceedings for the day and we should not sit tomorrow in order to give a full opportunity to the commission’s legal team and the former president’s legal team to see whether a way can be found in which his concerns are addressed," he said.

"I am confident that there are reasonable prospects that a way will be found to make sure we can proceed with a certain understanding." 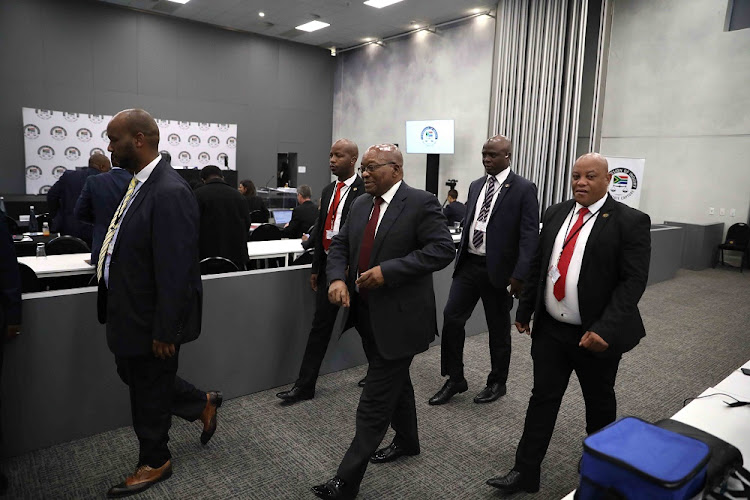 Jacob Zuma's lawyer asked the state capture inquiry for an adjournment on Wednesday afternoon to consult with the former president on whether he wants to continue with his testimony.
Image: Thulani Mbele

'It comes with the territory': defence minister on Jacob Zuma death threats

Defence minister Nosiviwe Mapisa-Nqakula did not want to be drawn into former president Jacob Zuma's claims that his life was under threat from ...
Politics
3 years ago

Zuma adamant he did not pressure Barbara Hogan over Siyabonga Gama

During Wednesday's testimony, Zuma denied he had insisted that Gama be appointed as Transnet's group CEO.

Hogan previously told the commission that she met Zuma a month into her appointment in 2009 to discuss issues affecting the parastatal, especially that of appointing a permanent group executive to replace Maria Ramos.

After an extensive process, Transnet’s board recommended Sipho Maseko - who at the time was CEO of BP SA.

But Zuma apparently would not have it.

"I was extremely shocked. He would not hear of any candidate except Siyabonga Gama. I informed him that Gama was facing some serious misconduct charges that the board, in terms of the PFMA [Public Finance Management Act], was obliged to investigate,  and under these circumstances it would not be in the interest of Transnet to appoint a group executive whose time would be caught up defending these allegations," she said.

"He then said to me 'you may not appoint anyone to the board', because the board also had to have changes, until Gama's disciplinary is over."

At the time, Gama was facing charges over tender irregularities which saw the irregular awarding of an R18m contract to a company owned by then communications boss Siphiwe Nyanda.

Zuma told the commission on Wednesday that he could not recall saying those things to Hogan.

"I don't remember myself saying these things. How could I have said this, when someone is being charged on serious charges and I would say 'no, take the person'. I don't remember me insisting on this," he said.

"There is a process that determines who becomes the winning candidate ... I would not have said this, not at all ... It means I would also be undermining the process itself. I would have been saying 'this is my person, finish'. I could not have said so … I was looking at the process, that whatever happens at the end that will be the decision, I did not put my preference on Gama or whoever."

Barbara Hogan is wrong - there were no jobs for pals, Jacob Zuma tells Zondo inquiry

Earlier on Wednesday, Zuma defended the the ANC's deployment committee, which recommends candidates for senior positions in government and state-owned entities.

The committee came under fire from Hogan when she told the state capture inquiry last year that the committee had become ineffective, promoting to senior positions only those who were loyal to certain factions.

IN PICTURES | Under pressure: Seven images showing a reluctant Zuma at Zondo Commission

Former president Jacob Zuma has begun his testimony at the commission of inquiry into state capture.
Politics
3 years ago

Zuma asked what was wrong with promoting those who were loyal to the ANC.

"Yes there is a deployment committee in the ANC. The ANC took a decision that given the fact that it was a ruling party, it is given that position because it has won elections. People in the country feel that the ANC can lead them better on the basis of its policies," he said.

"The ANC agreed that there must be some assistance to government in terms of finding people to do specific things and also ministers, as they search for people to put into positions, they would also rely to the party to say 'I want to deploy so and so in this kind of position, is there any person capable for this that you can recommend?'

"The interest of the ANC is to ensure there are cadres who can implement the programmes."

The former president said the deployment committee may recommend people to boards of state-owned entities and to the executive level at government departments.

"She is expressing her views. As I was explaining, the party can't just allow a situation where you take anybody anywhere.

"It's not meant to take your friends, because the committee discusses what type of person we want. In terms of the process, it is not done in the manner in which she is putting it," he said.

"Why should you not take people who are loyal to the party if they have skills and everything? Those people (the deployment committee) look at the capabilities and suitabilities of people not whether this person agrees with me politically or whatever."

Former SA National Defence Force head Siphiwe Nyanda has vowed to ensure that Zuma accounts for the claims he has made at the state capture commission.

Nyanda told Sowetan that Zuma cannot be allowed to make spurious allegations and get away with them.

He was speaking after allegations made by Zuma that Nyanda had links to apartheid police during apartheid.

"I am taking advice on the matter. Of course he can't be let to say these things and get away with them. There will obviously be a response somehow, somewhat," Nyanda said.

Zuma also told the commission that former cabinet minister Ngoako Ramatlhodi was a spy recruited while he was studying in Lesotho. Ramatlhodi responded by inviting Zuma to take a lie detector test with him in public before the commission.

According to Nyanda, Zuma was making claims to avoid dealing with questions around how corruption flourished under his presidency.

"He's trying to avoid the things that he's supposed to do before this commission - which is to give evidence on the allegations against him," he said.

"Truth of the matter is he was going there to give evidence on state capture and the corruption that went on in government during his tenure in office and he's avoiding all that by throwing mud all over the place."

Nyanda was among those who were instrumental in making sure Zuma ascended to power at the 2007 ANC Polokwane elective conference.

He said Zuma was probably bitter because his tone had changed and he had called for Zuma to step down.

"I'm actually not surprised, because I'm one of the people who have consistently called on Jacob Zuma to step down, because I think he was toxic to ANC. I'm one of those who said he must step down and save the ANC. At the time we were calling for him to step down, I had no dislike of him. I had no personal desire to see him down. I have never had any hatred of Zuma, but I had love for my country, I had love for my organisation," said Nyanda.

Jacob Zuma to be asked about appointees to state-owned entities

Zuma is expected to be quizzed on whether he overstepped his mandate by instructing that appointments be made to the executives of various state-owned entities when he returns to the state capture inquiry for the third time on Wednesday.

The commission is expected to turn its line of questioning to evidence provided by former public enterprises minister Barbara Hogan, who testified last year that Zuma unlawfully instructed her to appoint certain people into key executive positions at Eskom and Transnet.

Although he did not have the mandate to do so, Zuma is also said to have instructed her to withdraw information on certain issues in her reports to parliament.

In one example, Zuma is said to have insisted on the appointment of state capture-implicated Siyabonga Gama as Transnet's group executive. At the time, Gama was already facing charges over tender irregularities.

According to Hogan, Zuma also instructed that a process to replace then Eskom boss Jacob Maroga be stopped in 2012.

Zuma's second day before the commission ended when evidence leader Paul Pretorius began quizzing him on the normal processes of appointing executives at state-owned entities.

The former president's legal representative, Muzi Sikhakhane, asked for an early adjournment. Pretorius agreed, saying the day had been "strenuous".

Former president Jacob Zuma had family support in the form of his twins, Duduzane and Duduzile, as he gave evidence at the state capture commission ...
Politics
3 years ago

ANC Ekurhuleni chairman and the city's executive mayor Mzwandile Masina on Monday took a swipe at the Zondo Commission, calling it "an embarrassment".
Politics
3 years ago