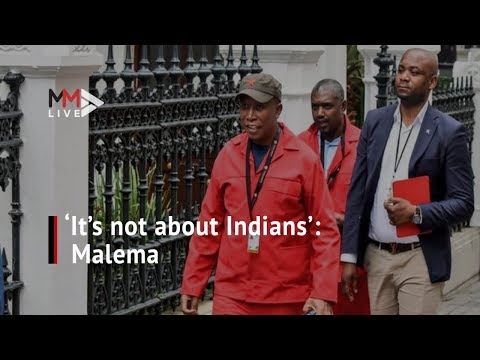 EFF leader Julius Malema has rejected an accusation that his party is racist towards South Africans of Indian origin, and that its pursuit of public enterprises minister Pravin Gordhan is due to his race.

“It's not about Indians,” said Malema on Thursday.

“We have gone after Africans who were found wanting and now [because] we go after an Indian we are told you are anti-Indians. It will not shake us,” he added.

He was speaking to journalists in parliament at a press conference convened to respond to the Ahmed Kathrada Foundation and SACP's call for the public to close ranks around Gordhan and their plans to pursue action against public protector Busisiwe Mkhwebane.

Minister in the presidency Jackson Mthembu on Wednesday accused the EFF of being racist towards South Africans of Indian origin. He said one of the reasons for the party's “anarchic pursuit” of Gordhan was its deep-seated hatred of Indian compatriots.

In his retort, Malema said the EFF had never spoken about Gordhan's race and he pointed to the fact that the EFF had elected two South Africans of Indian origin – secretary general Godrich Gardee and former treasurer-general Magdalene Moonsamy - among its top officials in December 2014.

He charged that if Gordhan was as honourable as his ANC colleagues had told Parliament, he would have stepped aside and allowed the public protector and court processes to be finalised.

“An honourable man who is praised by all as being honourable would have taken leave, and said, 'President, release me, let me go and deal with this matter as soon as possible.' He doesn't do that.”

He said Gordhan should have interdicted Ramaphosa from implementing the remedial action and not the public protector, claiming the minister didn't do so because he was in the same faction as the president.

Turning to the SACP and the organisations supporting Gordhan, Malema accused them of being worse than former president Jacob Zuma in their attitude towards the public protector. The EFF took Zuma and parliament to the constitutional court over disregard of the public protector's remedial actions on the Nkandla saga and won, in 2016.

He said that unlike the SACP's call for Busisiwe Mkhwebane's removal, Zuma never mobilised anyone to undermine Thuli Madonsela when he disagreed with her.

The EFF leader vowed to meet the pro-Gordhan organisations “in the streets” on Tuesday, when the court will sit to hear Gordhan's appeal. He also called upon EFF members and others to come out in support.