Is there trouble in the EFF paradise?

If not then what with EFF leader Julius Malema telling party supporters not to vote for leaders who have taken being praised for being articulate into their heads.

Without mentioning names, Malema told the party’s 6th anniversary bash in Mpumalanga yesterday there were leaders who had “hijacked” the EFF “train”.

“Any leader that is not working hard, any leader that always appears in controversial issues that undermine the image of the EFF is no leader at all,” said Malema.

Malema’s deputy Floyd Shivambu has been embroiled in the VBS Mutual Bank scandal which has seen the EFF being widely scrutinised and standing questioned.

Malema went on: “Any leader that is busy but busy over nothing is no leader at all. All leaders must be grounded. Leaders must be humble and leaders must answer their cell-phone. “Leaders do not get easily excitable, even if you win Lotto and even if you get involved in big deals but leaders must remain humble and not act in an excited manner like children getting into a shop full of sweets running all over. I have seen leaders of the EFF getting excited. 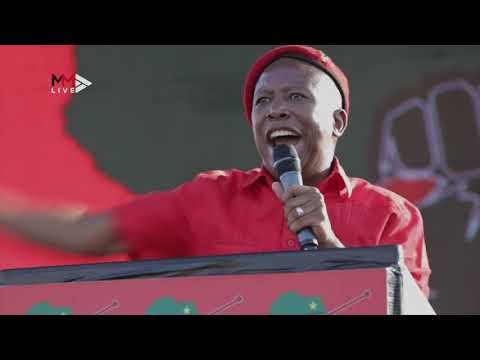 “This revolution does not need people who get easily excited when they are told ‘you are very good, you are well-qualified and you sound better than all of them’ because if that excites you, you are not a leader.” Shivambu has often received positive feedback from social media for his un-interrupted speeches on financial issues in parliament.

Malema said the EFF will not be held at ransom by such leaders.  “This thing [EFF] is heavy, it does not need chance-takers. It does not need people who love niceties. It does not need leaders who become shapeless amoebas and do not know what they represent,” he fired while Shivambu sat behind him uncomfortably.

“We have started seeing some elitist tendencies among some leaders of the EFF; they are compromising the character of the EFF as mass-based organisation.”

While Malema did not mention a name in the attack, he was more than happy to directly praised EFF spokesperson Mbuyiseni Ndlozi.

“Mbuyiseni, I heard them there in parliament calling you an iceboy who is sent to get ice for leaders. You must never be shaken by names. Embrace every name they call you because they cannot falter you politically they start searching in dustbins,” said Malema.