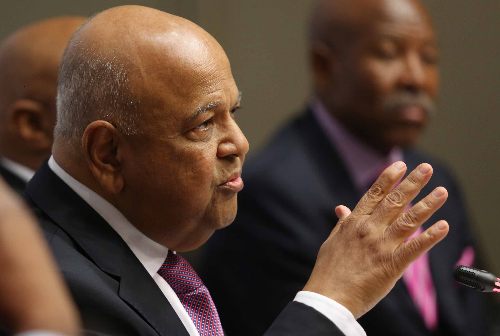 Commenting on the public protector's remedial action against Gordhan, judge Sulet Potterill said 'much of the orders are vague, contradictory and nonsensical'.
Image: GCIS

Public protector Busisiwe Mkhwebane has been interdicted from enforcing the remedial action against public enterprises minister Pravin Gordhan, in her report on the SA Revenue Service’s so-called rogue unit.

The high court in Pretoria on Monday found that the public protector’s office would not suffer any harm if the interdict was granted, but that Gordhan himself would.

Gordhan lodged the urgent application with the court to have the remedial action suspended pending the outcome of a review of Mkhwebane’s report.

His application was supported by President Cyril Ramaphosa.

The public protector and the EFF had opposed the application.

Public enterprises minister Pravin Gordhan was successful in his application for an urgent court interdict to have Public Protector Busisiwe Mkhwebane's findings against him reviewed and set aside until a judicial review has been completed. Judge Sulet Potterill of the North Gauteng High Court read out the judgment.

Potterill said Gordhan had established a prima facie right for the interdict.

A two-part application was brought by Gordhan after Mkhwebane found that he had violated the constitution when he established an intelligence unit at Sars. She also found that he had deliberately misled parliament about meeting the controversial Gupta family.

Mkhwebane directed Ramaphosa to take appropriate disciplinary action against Gordhan within 30 days and directed National Assembly speaker Thandi Modise to refer the minister’s violations to the joint committee on ethics and members’ interests for consideration.

She also directed that the SA Police Service (SAPS) commissioner investigate, within 60 days, the conduct of Gordhan, former deputy commissioner Ivan Pillay and other officials involved in the Sars unit, for violating the constitution and the National Strategic Intelligence Act, and told National Prosecuting Authority (NPA) head Shamila Batohi to finalise the court case against former Sars officials.

Potterill on Monday said it would be “remiss” of the court to not comment on the remedial orders in Mkhwebane’s report.

Potterill says the public protector's office would not suffer harm if the interdict was granted, it would br Gordhan who would suffer harm #GordhanvsPublicProtector

Public protector Busisiwe Mkhwebane and public enterprises minister Pravin Gordhan are at the centre of online conversation as they battle ...
Politics
2 years ago

The standoff between Pravin Gordhan and Busisiwe Mkhwebane played out in court on Tuesday when top legal minds argued over whether her suggestion ...
Politics
2 years ago