This after Maimane spoke out about the DA's relationship with Mkhwebane.

TimesLIVE reported that he said although he was pleased with Mkhwebane's findings regarding President Cyril Ramaphosa's campaign funding, she must go.

He added that the Constitutional Court judgment against her strengthened the party's case to have her removed.

Speaking on eNCA, Zille said Maimane should not have approached the public protector's office about Bosasa's alleged donation to Ramaphosa's ANC presidential campaign, while at the same time calling for her removal.

Zille was accused of lambasting Maimane's decision while addressing around 200 people at the Cape Town Press Club last week. BusinessLIVE reported she "chided" Maimane, saying the party can't be for and against the public protector.

She has since denied the claims, saying it was not a "criticism", but a serious "dilemma."

"I respected Mmusi's decision ... I didn't lambaste anybody. I just merely said it was a dilemma."

*Editor's note: The headline of this article has been amended to reflect Helen Zille's denial that she criticised DA leader Mmusi Maimane. 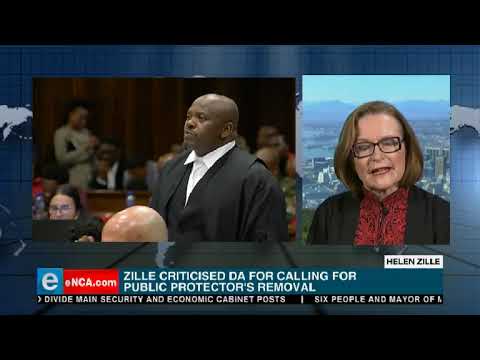 However, speaking on the move by the DA to approach the public protector to have Ramaphosa investigated, she said it was the opposition's role and duty to take up any alleged breach of the Executive Ethics Act.

"But it is a terrible dilemma to have such a compromised public protector and you have a complaint that only she can adjudicate," she said. "Things are not cut and dry or black and white in our politics. There are complex moral dilemmas and that is what we need to understand."

Zille, who herself has attracted controversy with tweets on the benefits of colonialism and alleged black privilege, said free speech and open debate is "absolutely critical".

"I will continue challenging vested interests, especially those that undermine the building of common nationhood and the inclusive economy that we need," she said.