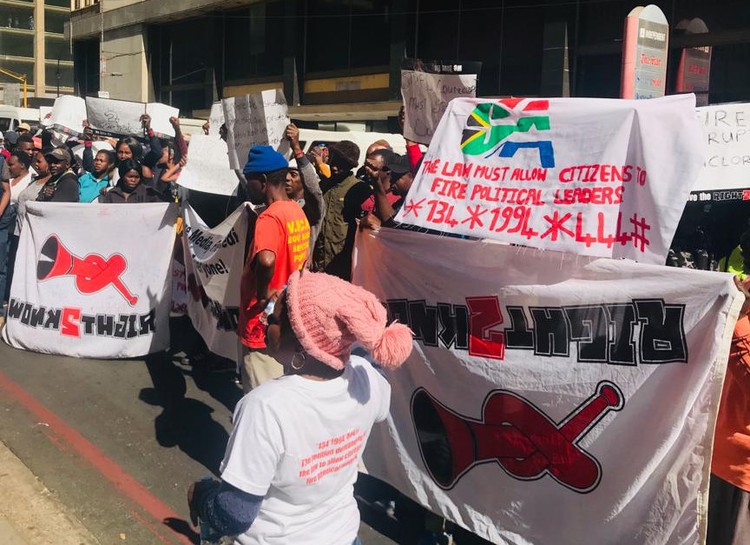 South Africans are demanding the right to be able to recall ward councillors who don’t perform their jobs well. The ANC and DA have supported the call but the EFF has refused to.
Image: GroundUp/Kimberly Mutandiro

About 150 people marched through Braamfontein on Wednesday to demand the right to fire incompetent ward councillors.

“We are tired of having to put up with non-performing ward councillors in our communities. We want to be able to fire them when they do not resolve our issues,” said Thoko Kopela from Katlehong.

The protest was led by representatives from the Recall Campaign, Right 2 Know, and Voices of Poor Concerned Residents.

They marched to the offices of the ANC, DA and EFF. The group consisted of people from across Gauteng. Over 26,000 people have signed a petition to support the right to recall ward councillors.

The memorandum called for political parties to make a public commitment before local government elections in 2021 to introduce legislation to give residents the ability to be able to recall ward councillors. The group held a similar march in May.

“We have come with a larger crowd than our May protest because the political parties did not respond to our previous pleas. People are tired and unhappy with their ward councillors,” said Katlego Mohlabane, the march convener and co-ordinator for the Recall Campaign.

ANC and DA representatives received and signed the memorandum. However, the EFF did not receive their memorandum.

“The EFF has refused to receive our memorandum for the second time,” said Mohlabane. “It is very disappointing.”

The political parties were given 14 days to respond.

“As voters, we know by now that politicians evade their promises through a ‘study process’ or by hiding in procedural details. We will be monitoring post-election, and any attempt to hide behind bureaucracy instead of having a public debate in parliament and before committee will be met with loud public action,” the memorandum read.

Dumi Weyi from Nigel said: “Our ward councillor simply turns a blind eye to our problems. No matter how much we approach him with our problems he always says he is busy.”

Sibusiso Nkosi from Heidelberg said: “I have been unemployed for so many years. Our councillor gives contract work to his friends and relatives. But when we say he must go no one listens. Being given the right to recall ward councillors is the only way forward. We need councillors who will give us jobs.”

After 25 years of waiting for services, Ncwadi erupts in protests

Police used rubber bullets, stun grenades and teargas to disperse a protest by about 1,500 residents from Ncwadi, Pietermaritzburg, on Monday.
News
2 years ago

'We will burn them alive': PE residents fed up with crime want better policing

Hundreds, perhaps thousands, of residents of Booysens Park and nearby areas in Port Elizabeth shut down their neighbourhoods on Wednesday.
News
2 years ago

A ward councillor was shot and killed in the Eastern Cape on Saturday.
News
2 years ago