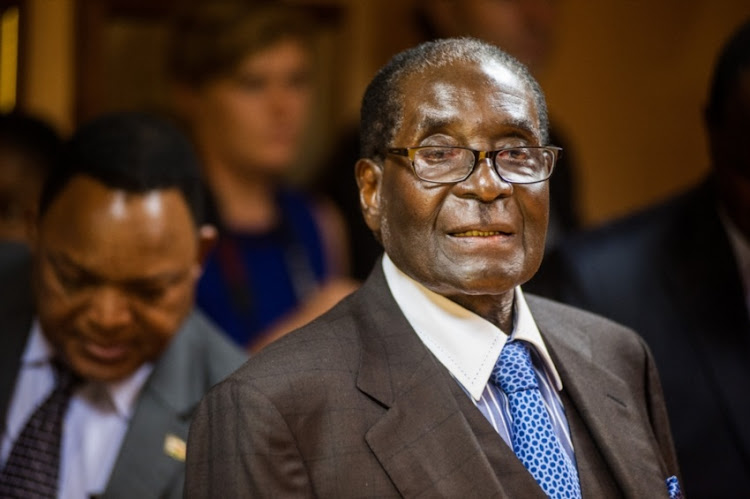 Then Zimbabwe president Robert Mugabe photographed during a three-day state visit to South Africa, during which he met with then SA deputy president Cyril Ramaphosa on April 9 2015 in Pretoria.
Image: GALLO IMAGES/SUNDAY TIMES

President Cyril Ramaphosa has mourned the passing of former Zimbabwean president Robert Mugabe, hailing him as a liberation fighter and champion of Africa’s cause against colonialism.

Mugabe passed away in a hospital in Singapore after a long illness. He was 95 years old.

“Under President Mugabe’s leadership, Zimbabwe’s sustained and valiant struggle against colonialism inspired our own struggle against apartheid and built in us the hope that one day South Africa too would be free,” Ramaphosa said.

He added: “During the decades of our own struggle, Zimbabwe’s liberation movement supported our own liberation movement to fight oppression on multiple fronts. After Zimbabwe achieved independence, the apartheid state brutalised and violated Zimbabwe as punishment for supporting our own Struggle”.

In a separate statement on Friday, Ace Magashule, secretary-general of the ANC, described Mugabe as a friend and revolutionary comrade of SA's governing party.

"Though the ANC and its leadership may have differed, often vociferously, with Comrade Mugabe on matters of national interest, as fraternal organisations we held as sacrosanct the principle of sovereignty...," Magashule said.

"To our friends in Zanu-PF, be comforted that you have lost a leader whose service to his country will forever be inscribed. We mourn with you the passing of our friend, statesman, leader, revolutionary."

Zimbabwe's first post-independence leader, Robert Mugabe, died at the age of 95 on September 6 2019 while in hospital in Singapore.

Ninety-three-year-old Robert Mugabe may not be the Zimbabwean president anymore‚ but he will be living like one.
News
4 years ago