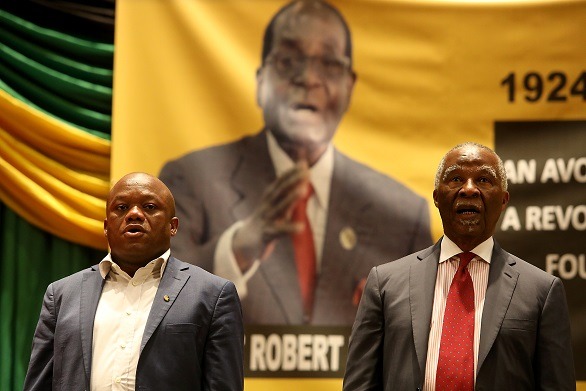 Former president Thabo Mbeki has described late Zimbabwean president Robert Mugabe as a tried-and-tested compatriot and a great pan-African who defended his beliefs.

Mbeki was speaking at a memorial service for Mugabe at the Durban City Hall on Tuesday.

"The message is very clear: one of the cadres and comrades we should always value as one of the combaters for the liberation of South Africa is president Robert Mugabe," said Mbeki.

Mbeki elaborated on the historical relationship between South Africa and Zimbabwe, both before and after the country gained its independence under the leadership of Mugabe.

What is this nonsense the ANC is telling us about Mugabe?

The ANC has always been first out the gate when it comes to defending what people in Tshwane townships call nyoso (nonsense).
Ideas
2 years ago

Speaking in front of hundreds of ANC members, as well as a delegation from Zimbabwe that included one of Mugabe's nephews, Mbeki paid homage to Mugabe's life. He labelled the Zimbabwean leader as a great political actor who had an interest in the countries of the south.

"As we began negotiations here in South Africa in 1990, the 10-year period of the constitution of Zimbabwe came to an end. Zimbabwe had to redo its constitution. The then secretary-general of the Commonwealth approached Mugabe to plead with him not to make changes to the Lancaster House Agreement, which spoke directly to land reform," he said.

Mbeki said the ANC was worried that if amendments were made to that agreement, it would have scared the white population in South Africa and impacted negatively on SA's negotiations. "And that was agreed upon. The land reform process was delayed in Zimbabwe for at least a decade. It was done in order for us to complete our negotiations," he said.

Twitter has ruled that EFF leader Julius Malema's tweet containing quotes from late Zimbabwean leader Robert Mugabe was not a "violation of any ...
News
2 years ago

KZN premier Sihle Zikalala said Mugabe was someone who spearheaded the agenda of the African community.

"For those who ask why we celebrate Mugabe, we want to make it clear that Mugabe was what he was because of the enemies of his revolution," said Zikalala.

"Following the departure of the president of Zimbabwe, it was important for us as the ANC to celebrate the life and times of comrade Mugabe. We believe we have an obligation as the current leadership of the ANC to honuor those who came before us," said Ntuli.

Mugabe, who ruled Zimbabwe for 37 years until he was ousted by his own army in November 2017, died in a Singapore hospital on September 6, aged 95.

On Friday, Mugabe family spokesman Leo Mugabe said the late president would be buried at the National Heroes Acre monument in Harare in "around 30 days".

Former Zimbabwean president Robert Mugabe will be buried at the National Heroes Acre monument in Harare in "around 30 days", Mugabe family spokesman ...
News
2 years ago

Former president Thabo Mbeki's defence in online newsletters of his controversial "quiet diplomacy" towards Zimbabwe, ahead of and during the 2008 ...
News
5 years ago