Duduzane Zuma asked why meetings were held at Gupta mansion, not his own home 600m away 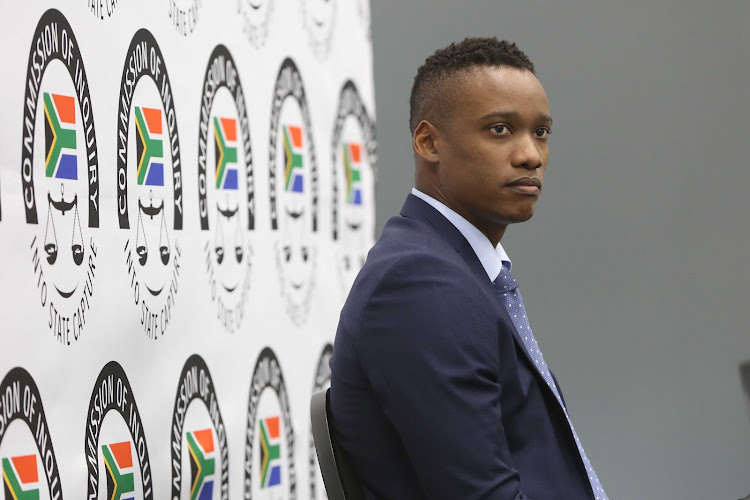 Duduzane Zuma took to the stand at the Zondo commission on Monday October 7 2019. Zuma testified to his version of numerous events, including the infamous Oakbay meeting and his part in television station ANN7.

Duduzane Zuma maintains that there was nothing wrong in taking former deputy finance minister Mcebisi Jonas to the Gupta family's Saxonwold home in 2015.

The former president's son was testifying for the first time before the commission of inquiry into allegations of state capture on Monday.

Evidence leader Phillip Mokoena began his line of questioning on allegations by Jonas that he was taken from the Hyatt Hotel in Rosebank by Zuma to the Gupta compound nearby on December 23 2015. The meeting was conducted under the impression that Jonas was meeting Zuma and ANC member Fana Hlongwane to discuss rumours that Hlongwane was blackmailing Jonas.

Jonas told the commission last year that he did not know where they were going.

It was at this meeting that Jonas was allegedly offered the job of finance minister plus a R600m bribe by the Gupta family. This was apparently in exchange for doing the family's bidding once he took office.

Zuma conceded that he arranged the meeting between Jonas and Hlongwane - who are old friends - and drove Jonas to the Gupta compound. Asked why he was taken to the Gupta family's home, Zuma said it was a matter of a "proximity and a time frame issue".

The compound is near the hotel but Zuma also owned a property only 600m away from the Guptas. He was asked why he did not conduct the meeting at his own home.

"That was the preferred meeting place outside an office premises ... I have never conducted any meetings out of my private place … It was a private meeting between the three of us. There was no one else present," he said.

Zuma, a known long-time business associate of the Gupta family who has served as a director in a number of their companies, said Jonas knew where they were heading.

Mokoena then asked why he was chosen to facilitate a meeting between two friends to discuss a rumour.

"I was not chosen; I decided to put the meeting together. The reason for that is on the one side, they are very good friends and have know each other for a long time. You have a situation where there are a number of issues ... I raised these matters over a period of time with [Hlongwane]. I said to him can we resolve this and he left the matter in my hands," he said.

"I don’t see it as strange that an unknown entity tries to resolve an issue. I’m the one who raised the issue with [Hlongwane] ... As the younger guy, I said to him this needs to happen. And he said if you are putting your neck on the line, you need to be part of the meeting. I was the horse’s mouth."

These are the questions Zondo wants Zuma to answer

The state capture inquiry has sent former president Jacob Zuma 80 questions about the evidence given against him in its hearings.
Politics
2 years ago

WATCH | State capture: Who has been implicated in Crime Intelligence 'slush fund' matter

Flights, holidays, luxury vehicles, paying off journalists' cars and upgraded security in private homes are just some of the things the Crime ...
Politics
2 years ago

Police whistleblower Col Dhanajaya Naidoo denied that he turned himself over to the Hawks in 2011 to avoid prosecution for his role in looting Crime ...
Politics
2 years ago