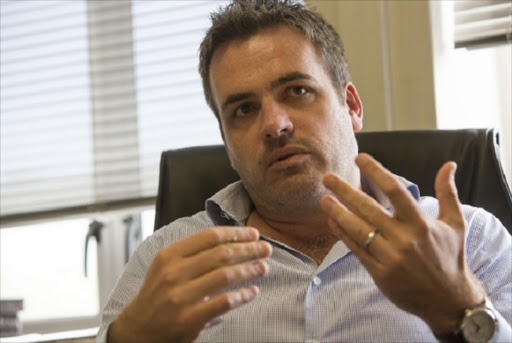 Paul Boughey's resignation comes on the eve of the DA's watershed federal council meeting in Johannesburg at the weekend.
Image: HALDEN KROG

Boughey communicated his decision to step down at a teleconference with other party leaders and in a letter to DA structures.

His resignation comes on the eve of the party's watershed federal council meeting in Johannesburg this weekend.

The council will meet to elect a new DA federal council chairperson, the party's second most powerful position, and to deliberate on the party's organisational review report prepared by former party strategist Ryan Coetzee and former party leader Tony Leon.

Knives have long been out for Boughey after the DA's poor electoral showing in this year's general election, with his detractors blaming him, party leader Mmusi Maimane and other top figures for the party's failure to increase its electoral support.

It's also understood that the panel was likely to recommend that the position of CEO be scrapped as part of overhauling the party's systems and policies.

Good Party secretary-general Brett Herron has accused the DA of preparing a "soft landing" for its CEO, Paul Boughey.
Politics
2 years ago

Boughey's resignation comes amid rumours that “a soft landing” was being prepared for him in the form of a senior position in the DA-led city of Cape Town.

But Boughey has denied the rumour.

“No, I am not going to any DA role, in or out of government. I have been doing this for close to five years, and it's time to focus on my family,” he said.

In his resignation letter, Boughey said the DA was engaged in a process of “self-introspection”.

In the letter, Boughey described the DA results on May 8, in which it failed to grow support for the first time since its establishment, as “disappointing”.

He added that he was stepping aside to allow the incoming DA federal council chairperson and other party leaders space to map a new course for the party.

“The DA is going through an important phase of self-reflection, a necessary process in order to strengthen itself. I am always struck how much criticism the party and its leadership come under, when all too often so much of this critique is made blissfully unaware of how complex and important the DA and its cause is to South Africa,” Boughey wrote to DA structures.

The DA's federal executive (Fedex) has rejected a recommendation that embattled leader Mmusi Maimane step down.
News
2 years ago

“It is therefore the right time to hand over the baton, and to allow the leadership and new chair of the federal council the space to chart their own course.”

Boughey said he was grateful for having worked closely with outgoing DA federal council chairperson James Selfe and with Maimane.

“ James is truly one of the unsung heroes of South Africa’s democratic dispensation.

“His wisdom, counsel and support has been invaluable, and the 40 years of service he has offered this party and its predecessors is unlikely to ever be matched in our lifetime.

“Working with Mmusi has been an extraordinary experience. Together we have travelled across South Africa and the world, and I have always been struck by his unwavering commitment and belief in building one South Africa for all.

“I have seen first-hand the warmth and affection South Africans from across all walks of life have for him. He too has taught me much; humility, patience and an unwavering belief that ultimately the better angles of people’s nature will prevail, something which I am sure has been severely tested in recent times.”

The DA has barred its leaders from publicly campaigning for the crucial chairperson of federal council position.
Politics
2 years ago

The East London high court has ordered the Democratic Alliance to pay damages to a former member who sued the party for R10m over a "toilet" ...
Politics
2 years ago