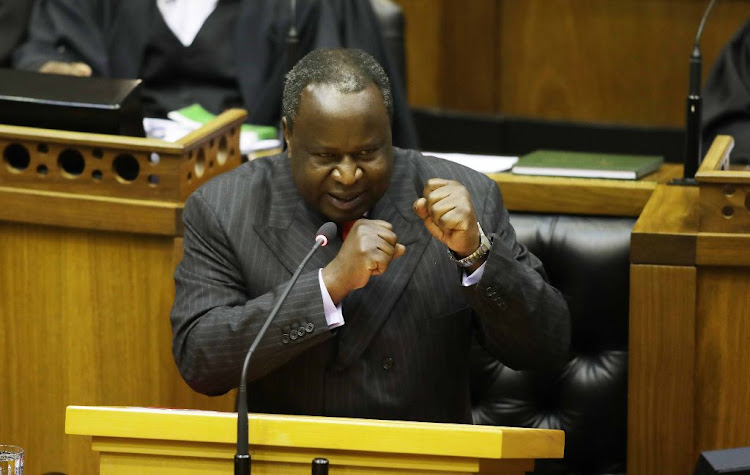 Transport minister Fikile Mbalula and Gauteng premier David Makhura have lost the battle on the issue of e-tolls after finance minister Tito Mboweni refused to do away with the "user-pay principle".

Mboweni announced in his medium-term budget policy statement [mini-budget] that the Gauteng e-tolls are here to stay in their current form, which means road users are still expected to pay.

He said after considering several options to resolve the impasse over the Gauteng Freeway Improvement Project, the government decided to retain the user-pay principle.

“While there will be a further dispensation and value-added services, compliance will also be strengthened,” he said.

Mboweni said the non-payment of tolls had already led to roads deteriorating as there was no money to maintain the network.

“People must appreciate the service provided and just like they go to Pick n Pay to buy bread, they will pay for the use of this service,” he told journalists ahead of delivering his speech on Wednesday.

But during his speech, Mboweni appeared to be back-tracking, saying the discussions with Mbalula and Makhura were still ongoing, and the outcome will be announced by Mbalula at a later stage.

He urged the nation to pay its bills, saying South Africa needs to build a culture of payment, as government services could be sustainable only if all those who can pay for services did so.

In July, President Cyril Ramaphosa instructed Mboweni, Mbalula and Makhura to work together to come up with a solution to the e-tolls impasse by the end of August.

This followed a social media spat between Mboweni and Makhura, which the president at the time described as unfortunate and deeply regrettable.

Makhura had announced in his state of the province address that e-tolls would be scrapped, in accordance with a resolution that was initially taken at the Gauteng ANC conference in July 2018.

Mboweni took to Twitter to disagree, posting: "I don’t know why the middle and upper classes in Gauteng want to complicate our lives. The working class do not pay e-tolls! Public transport! Hello … "

Finance minister Tito Mboweni has decided to take a break from tweeting, saying Twitter is an abusive platform.
News
2 years ago

Makhura responded on the same platform, saying he would refer the scrapping of e-tolls to the president for consideration to make the final decision and that his engagements with the president and Mbalula had been positive. “Minister @tito_mboweni can continue to tweet as he cooks; he is a minister, not the president,” he added.

Mboweni responded by tweeting: “I am certain that the premier of Gauteng knows that you have to be careful before you pick up a fight with a natonal minister of finance. The one who controls allocations. I would be careful if I were him. User/consumer pays”.

The MTBPS document shows that since 2014/15, national roads agency Sanral has incurred annual average losses of R1bn. "The agency is not generating sufficient cash from its toll portfolio to settle operational costs and debt redemptions falling due over the next three years," it states.

The government has extended a total guarantee facility of R38.9bn to the agency, of which R30.3bn had been used by March 31 this year.

Over the medium term, Sanral is expected to repay R10.7bn of maturing debt obligations and R10.8bn worth of interest payments. To enable Sanral to pay these obligations, the government will implement direct user charges, as outlined in the white paper on national transport policy, reads the document.

Finance minister Tito Mboweni says the government will not bail out the national carrier SAA "forever", telling MPs that only a private equity ...
Politics
2 years ago

SA heading for debt trap as we spend more than we earn: Tito Mboweni