Tito Mboweni must 'explain what path he is crawling on': Faith Muthambi hits back 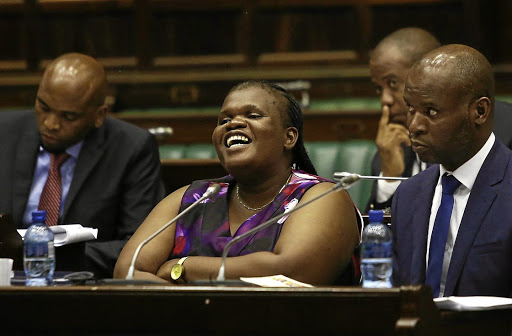 Former public service and administration minister Faith Muthambi denies that she signed off wage agreements without mandates during her tenure.
Image: Esa Alexander

In a strongly-worded statement, Muthambi denied that she signed off wage agreements without mandates during her tenure as minister.

She wants Mboweni to apologise to the nation for “peddling lies and explain what path he is crawling on”, and accuses the finance minister of grossly misrepresenting facts to the point of being irresponsible.

“Had the minister taken time off his busy social schedule to read the agreement on the salary adjustments and improvements on conditions of service in the public service, he would have not only found out who the signatories were at the time to blame, but also discharged his duties with integrity and do justice to the office he occupies,” she said.

“It is clear that there is an absence of the minister’s eyes and ears, and his lack of consultation has possessed him to utter such a defamatory and irresponsible statement to the nation.”

Muthambi said a statement dated June 8, 2018, issued by Mboweni’s cabinet colleague, Ayanda Dlodlo, in welcoming the conclusion of the wage negotiations, said, “as government we are glad that we have reached another multi-term agreement”.

“Minister Dlodlo thanked all the parties for working hard to ensure that this agreement is negotiated in the best interests of all public servants and the public at large.”

Said Muthambi: “I want to put it on record that the wage agreement was entered into long after I was no longer part of the executive and I am disappointed that my name seems to be the only thing in his vocabulary than him focusing on his duties at hand.”

Muthambi, who like Mboweni is an ANC MP, wants the minister to “stop his verbal diarrhoea and being hell-bent on playing the blame games” and start applying his mind on how he can better contribute positively to SA than boosting his “pompous ego” any further.

Mboweni on Wednesday blamed Muthambi and her predecessor Richard Baloyi for the huge and unmanageable public sector wage bill, saying they signed wage agreements outside their mandates.

He said the two former ministers should be held accountable for “getting us into this mess”.

Finance minister Tito Mboweni delivered his medium-term budget policy statement in parliament on October 30 2019. He addressed plenty of important topics, but also threw in some jokes here and there to stop us from getting too bored. Here are some of the funnier moments from his speech.

Finance minister Tito Mboweni says the government will not bail out the national carrier SAA "forever", telling MPs that only a private equity ...
Politics
2 years ago