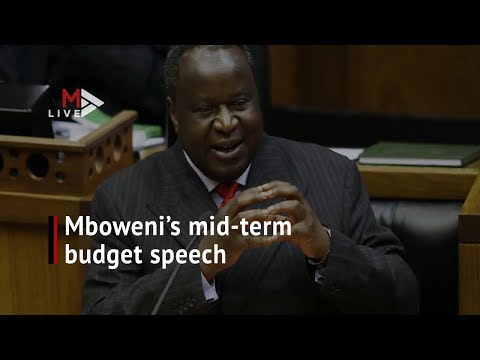 Here are five must-read articles on the mini-budget speech.

Mboweni told parliament that senior government officials won't be getting a pay rise “for the foreseeable future”.

He said these measures were to reduce the public sector wage bill.

“For the foreseeable future, cabinet, premiers and MECs’ salaries will be frozen at current levels. The cost of official cars will be capped at R700,000. A new cellphone dispensation will cap the amount claimable from the state.

“All domestic travel will be on economy class tickets. The minister of finance will make a determination on the appropriate use of subsistence and travel for all arms of the state.”

Mboweni said the government could no longer afford “throwing money at Eskom”.

TimesLIVE reported that the power utility was allocated R26bn for this financial year, while it was due to receive another R33bn in the 2020/2021 financial year and a further R10bn in 2021/2022.

“We cannot continue to throw money at Eskom. For the sizeable support required, it cannot be business as usual.

“Eskom must do the following: run their current plant and equipment better; achieve other operational efficiencies, including much better cash management; and fast-track the separation of the utility into three parts, as endorsed by the political principals. There should be no doubt about the policy decisions in this regard.”

He said an equity partner was needed to save the airline from “financial ruin”.

“It is unlikely ever to generate sufficient cash flow to sustain operations in its current configuration, which then begs the question: how long are we going to be on this flight path? Forever? I think not. Operational and governance interventions are required urgently.”

Mboweni warned that SA's debt exceeded R3-trillion and is expected to rise by a further R1.3-trillion in the next three years.

“The consequences of not acting now would be gravely negative for SA. Over time, the country would likely face mounting debt service costs and higher interest rates and may enter a debt trap.

“The unemployment crisis will worsen and government debt could balloon. This is an outcome we are determined to avoid,” he said.

Mboweni said the e-tolls system would remain in its current form.

He said the decision was taken after consultation with key players in the transport sector.

“We need to build a culture of payment, as government services can only be sustainable if all of us that can pay for them do so.

“People must appreciate the service provided and, just like they go to Pick n Pay to buy bread, they will pay for the use of this service,” he said.