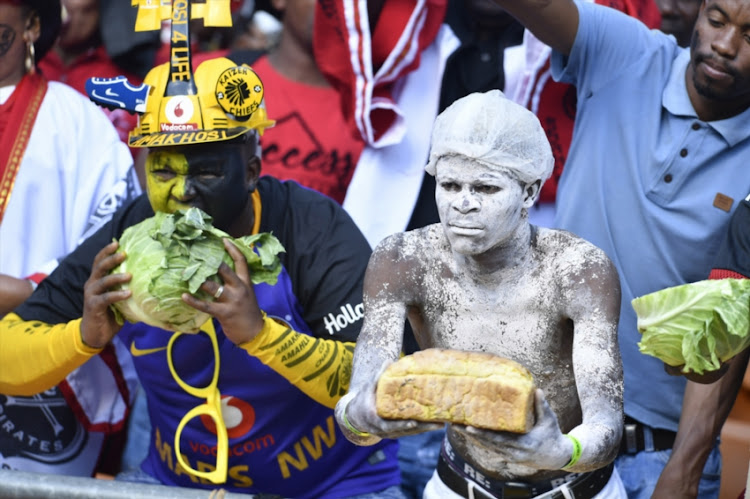 Some Kaizer Chiefs fans might be accused of taking their loyalty too far, as AIC MP Lulama Ntshayisa is finding out.
Image: Lefty Shivambu/Gallo Images

A motion congratulating a soccer team for victory against their rivals saw African Independent Congress (AIC) deputy president Lulama Ntshayisa being raked over the coals by his party, which said he missed an opportunity to engage intellectually and intelligibly.

The motion was always going to divide MPs – but even those who objected did so in jest. In fact, the motion saw MPs being divided not along party lines but as soccer team supporters.

Kaizer Chiefs bagged all the three points at stake and the bragging rights after a deserved 2-0 win over title rivals Mamelodi Sundowns at a sold-out ...
Sport
2 years ago

But Ntshayisa's boss, AIC founder Mandla Galo, was not amused. He is distancing the AIC from the “frivolous, inertia-inspired” motion and wants parliament to withdraw it.

The two men have been at loggerheads for some time over party leadership. Last year each wrote to then speaker Baleka Mbete requesting her to remove the other from parliament.

Galo was not present when Ntshayisa presented the motion in the house last week.

In a letter to parliament, Galo said: “The leadership of the AIC in parliament belatedly learned of a frivolous, inertia-inspired motion sponsored by honourable Ntshayisa, in which he sneaked a motion congratulating Kaizer Chiefs' triumph over Mamelodi Sundowns.

“The leadership distances itself from this motion. Parliament offers us space to intellectually and intelligibly engage, thus contributing to national discourse.”

Galo said in compliance with the rules of the National Assembly, the AIC would withdraw the Kaizer Chiefs motion - hopefully with the unanimous concurrence of all members present at the next available date for the tabling of motions.

This is unlikely to pass, however, as a number of MPs across party lines – including the ANC's Zizi Kodwa and GOOD leader Patricia de Lille - supported Ntshayisa by making the “love and peace” hand gesture associated with Kaizer Chiefs.

Tiny party torn apart as two leaders suspend each other

The tiny African Independent Congress (AIC) party has been plunged into turmoil by a power struggle between its leader and his deputy - and the ANC's ...
News
3 years ago

Galo said in future, all correspondences, notices of motions, written questions, member statements and motions without notice would be signed and sanctioned by himself.

The party revealed in a press statement that its national executive committee meeting resolved to distance itself from Ntshayisa's motion. The party said it understands and respects Ntshayisa for supporting Kaizer Chiefs as a person, but the AIC supports all football clubs in the country.

“The AIC wishes to apologise to all football lovers in the country," said the party.

Ntshayisa confirmed to TimesLIVE on Monday that he was rebuked at the party's NEC meeting for the motion. “I was asked about this in the NEC meeting on Friday. I was fighting, saying it's just a statement. It's a notice of a motion and not even a debate,” he said.

"They said I brought the party into disrepute; I was merely congratulating a winning team."

The ANC in parliament wants all MPs to attend compulsory and regular ethics training.
Politics
2 years ago

Ntshayisa's full motion was as follows: “On behalf of African Independent Congress, I hereby move without notice that we congratulate Kaizer Chiefs on their win against Sundowns on Sunday October 27, that Amakhosi beat Sundowns 2-0 in front of a crowd from both sides of teams [and] that it was not expected that Kaizer Chief would beat Sundowns. They had been winning, except the last game before the Sunday one.

"To further note that Sundowns' coach pretended as if he was not worried nor afraid of Kaizer Chiefs - he played mind games as abafana bokuthula noxolo were waiting and looking forward to the game; that the humble Kaizer Chiefs coach Ernst Middendorp was keeping quiet; and that the humble man made the Sundowns coach to eat humble pie.

“Amakhosi are now on top of the PSL log. They are now preparing for the big Soweto derby against Pirates on Saturday. This happened on the day of the birth of Oliver Tambo. Keep it up Makhosi. I so move.”

An ANC MP rising on a point of order objected, stating: “Mamelodi Sundowns are the champions of South Africa, the best team in the world.”

“We want to object on behalf of Pirates!” said DA MP Tsepo Mhlongo - to roars of laughter in the house.

Outspoken Mamelodi Sundowns coach Pitso Mosimane's claims that local referees have a bias towards Kaizer Chiefs were echoed by the club's midfielder ...
Sport
2 years ago