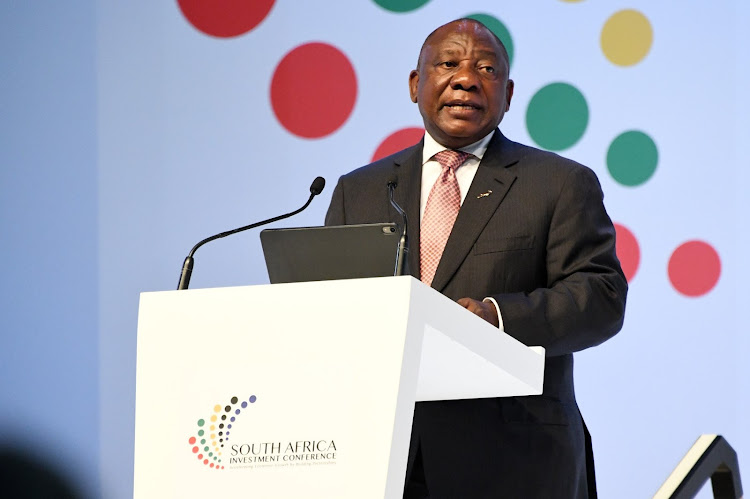 President Cyril Ramaphosa’s opening speech to the second annual investment conference was a balancing act between acknowledging the problems persisting in South Africa and a message of hope as he made a case for investment in the country.

Addressing hundreds of delegates at the SA Investment Conference in Sandton on Wednesday morning, Ramaphosa conceded that over the last decade, “the economy has barely grown, investment has dwindled and the rate of unemployment has increased”.

At the same time, Ramaphosa urged investors to put their money in South Africa, saying: "There can be no better time to invest in this dynamic, growing economy than now."

The president said R238-billion of the nearly R300-billion of investments that were pledged at the last investment conference have begun. He has a target to raise $100-million – or R1.2-trillion – in new investments over five years.

Since coming into office, Ramaphosa and his administration have been confronted with a shrinking economy and rising unemployment. Last week, unemployment data showed the highest level of joblessness in 11 years, with Stats SA saying the unemployment rate was 29.1% in the third quarter of 2019.

“We have determined that we will move forward, effect far-reaching reforms and undertake the detailed work required to turn our economy around,” Ramaphosa said.

In his sales pitch to investors, Ramaphosa said South Africa had a lot to offer was a viable and profitable investment destination.

“Indeed we have a lot to offer, in the form of our people, in natural and mineral resources, with a young and able workforce, world-class infrastructure, sophisticated telecommunications systems, and a well-regulated financial and banking sector,” the president said.

He cited the rule of law in this country, an independent judiciary, strong legal framework and human rights as reasons why investors should consider South Africa to other countries.

Ramaphosa further said that SA has a vibrant civil society, a progressive labour regime and an independent and robust media.

“Our democracy is strong, robust and wonderfully noisy and our institutions are durable, confirming the political stability of our body politic over the past 25 years and into the future,” he said.

Ramapahosa said his government is clear about what it needs to do, and “we are marshalling our every resource and our every capability to do it.”

“We have acted decisively to end state capture and are rebuilding the capacity of the state.

“We have fostered greater policy coherence and are improving alignment across the different spheres and entities of government.

“We have been steadily working to create a business environment that is competitive and conducive to investment,” Ramaphosa said.