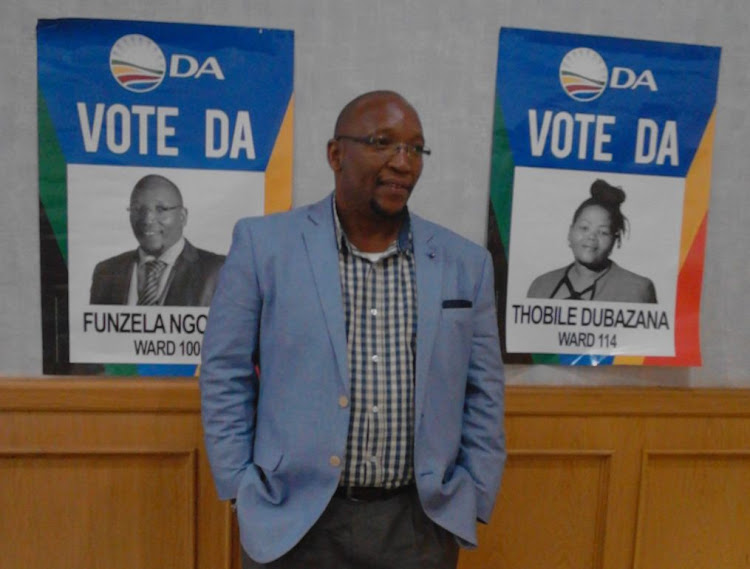 The DA's Funzi Ngobeni has been chosen by the party to replace Herman Mashaba as Joburg mayor.
Image: Twitter/@FunzelaZA

Mashaba will step down from his job on November 27 after his dramatic resignation from the DA in protest about the election of Helen Zille as chairperson of the party's federal council.

TimesLIVE understands that Ngobeni had been recommended as the mayoral candidate for Johannesburg by a selection panel which sat on Monday last week.

In a statement on Tuesday, Gauteng DA leader John Moodey congratulated Ngobeni, who was always a front-runner to take over from Mashaba.

“We congratulate Funzela on his election. We trust he will be elected to serve the people of Johannesburg as executive mayor, and we commit our support to him unconditionally in the pursuit of creating one South Africa for all,” said Moodey.

He said Ngobeni had been a long-serving DA councillor before he took over as the leader of government business and finance MMC in 2018.

Moodey said the DA went through a rigorous selection process before appointing him and was confident that should he be elected on November 28,  he would continue the good work done by outgoing mayor Herman Mashaba "by streamlining services to improve the lives of all residents”.

Ngobeni's selection as mayoral candidate comes weeks after he was elected regional leader of the DA in Johannesburg.

But despite his appointment to the position, Ngobeni risks sitting in the opposition benches following a change in power dynamics in the city council.

Julius Malema’s EFF, which has kept the DA in power since 2016, has fallen out with Ngobeni's party since shortly after the elections in May.

In July this year, Malema instructed his councillors in both Johannesburg and Tshwane to abstain from voting, paving the way for a possibility of an ANC-led government in Johannesburg.

Last week, the Sunday Times reported that the IFP held the keys to the mayoral office in the city, and it was playing hardball with the ANC over a deal that could affect government in at least four municipalities in KwaZulu-Natal.

The IFP is said to be holding the key the ANC desperately needs to the Johannesburg mayor's office, but is playing hardball in discussions on a ...
News
2 years ago

Mmusi Maimane may be out of the DA but that doesn't mean he'll be quitting politics anytime soon.
Politics
2 years ago

Rise of the 'Zillenators': Helen Zille's 'allies' set to take top jobs at the DA

Emboldened by Helen Zille's stunning return to power this week, supporters of the DA's new federal council chair are planning a clean sweep of the ...
News
2 years ago