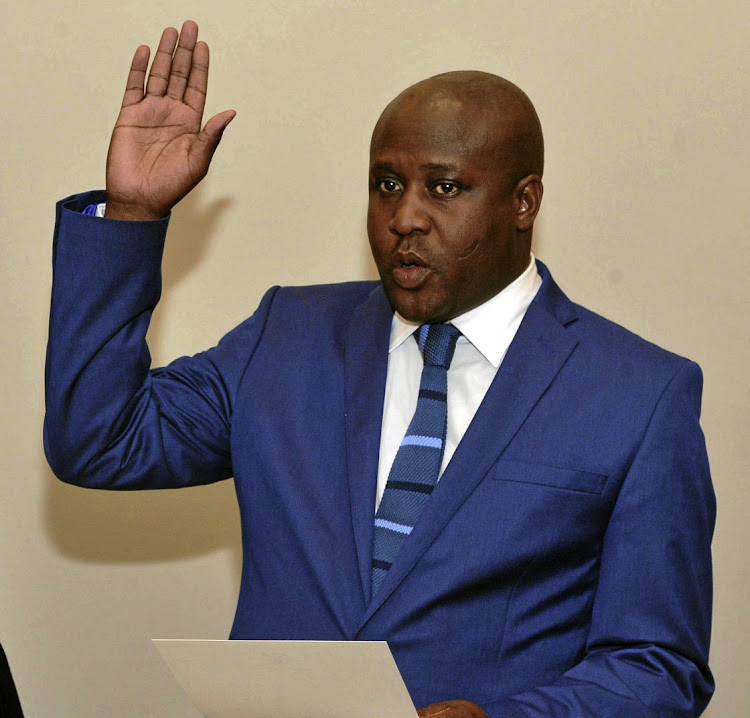 Bongani Bongo has been released on R5,000 bail after being arrested for corruption.
Image: Elmond Jiyane

Former state security minister Bongani Bongo was arrested by the Hawks on Thursday on charges of corruption. He was released on R5,000 bail.

Here's a breakdown of the events:

A 2017 'bribe to derail Eskom investigation'

In 2017, former parliamentary head of legal services advocate Ntuthuzelo Vanara accused Bongo of bribing him with a “blank cheque” to escape an investigation into the mismanagement of power utility Eskom. At the time of the alleged bribe, Vanara was heading the committee tasked with investigating the capture of Eskom by the controversial and corruption-accused Gupta family.

Vanara made these claims in a sworn statement submitted to the ethics committee in October 2017. Bongo accused Vanara of being in cahoots with ANC MPs Jackson Mthembu and Baleka Mbete, among others, saying they were jealous of his appointment as state security minister.

“It's a ploy of Baleka. They were just angry that Zuma made me a minister. I am the only minister who was appointed from being an ordinary member to minister. I was not a chairperson of a committee, I was not a deputy [minister], I was a backbencher in the true sense of backbenching and I was appointed not only as minister, but minister of state security,” he told Sunday Times.

His time as minister was brief. President Cyril. Ramaphosa fired him from his cabinet in February 2018, three months after he was appointed by Zuma during his October 2017 cabinet reshuffle.

On Thursday, Bongo appeared in the Cape Town magistrate's court on charges of corruption relating to the alleged bribe. Before his arrest, he was informed that parliament’s joint committee on ethics intended to revive its probe against him for breaching the legislature’s ethics code.

In an interview on eNCA, Bongo said he had not tried to bribe Vanara. “I don't have that cheque and I don't have any money to pay for bribery, because I don't have any interest in issues that relate to Eskom.” He threw public enterprises minister Pravin Gordhan into the mix, insinuating Gordhan had poisoned him.

Before his arrest, Bongo was in Cuba, where he sought “medical treatment”.

‘I don’t have any money to pay for bribery’: Bongani Bongo

Hours before arrest, MP Bongo was told he faces another probe

It was a double-whammy week for former state security minister and ANC MP Bongani Bongo.
Politics
2 years ago