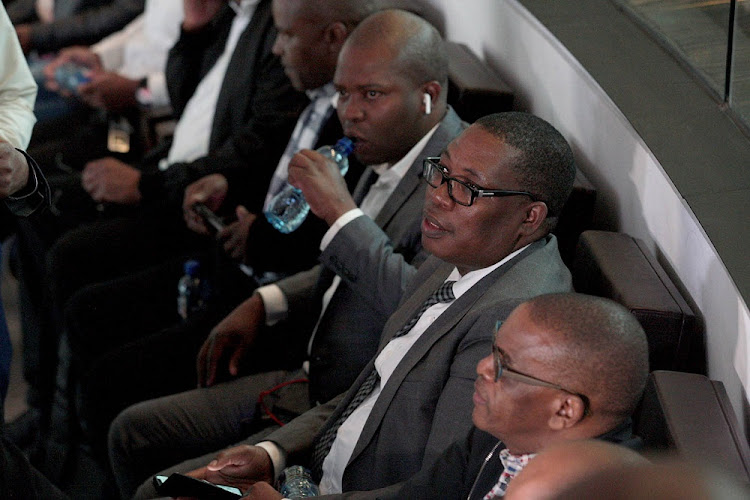 The ANC's Lebogang Maile, Panyaza Lesufi and Ace Magashule seated in the gallery ahead of the vote in council to elect a new mayor of Johannesburg.
Image: Sowetan/Veli Nhlapo

The ANC's Geoff Makhubo is the new mayor of Johannesburg.

Makhubo won the vote on Wednesday by a comfortable margin.

The ANC's nominee for the position - which was formerly held by Herman Mashaba of the DA, whose last day was on November 27 - received 137 of the votes cast. His closest challenger was the DA's Funzela Ngobeni, with 101 votes. The EFF's Musa Novela received 30 votes.

His victory comes a week after a council meeting where the new mayor was expected to be elected was delayed by council speaker Vasco Da Gama to get clarity over the procedure to be followed in electing Joburg's No 1 resident.

A sordid tale of two cities: the scramble for mayors is on

Mashaba resigned last month in protest of the election of Helen Zille as the DA federal council chair.

Makhubo's appointment sees the ANC reclaim the country's economic hub after being toppled by a DA-led coalition, supported by the EFF, following the local government election in 2016.

But that coalition government has collapsed, after the EFF fell out of favour with the DA.

Drawn-out negotiations between the IFP and the ANC led to the party ditching the DA and their relationship in five municipalities in KwaZulu-Natal.

The Johannesburg result also means that the DA is at risk of losing its mayorship of the City of Tshwane.

Its mayor, Stevens Mokgalapa, is under siege from opposition parties and from within his party following a leaked recording of him allegedly having sex with a colleague.

Both the EFF and ANC have filed motions to have Mokgalapa removed, while the DA is probing him over the recording.

Maimane and Mashaba join hands to start 'The People’s Dialogue'

Mmusi Maimane and Herman Mashaba are up to something and it involves having a dialogue.
Politics
2 years ago

In his last week as Joburg mayor, here's what Herman Mashaba had to say.
Politics
2 years ago

Get your affairs in order or I will intervene, David Makhura warns metros