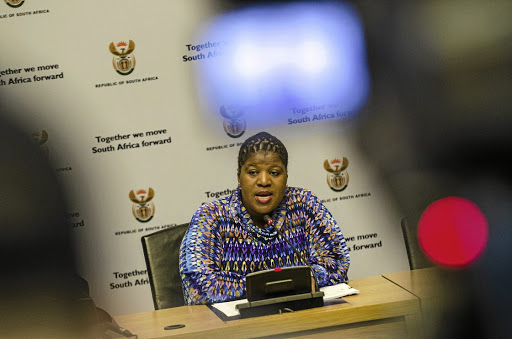 Former DDG Siphokazi Ndudane has hit back at accusations that she stole abalone worth millions.
Image: David Harrison

A former deputy director-general (DDG) at the national department of agriculture, forestry and fisheries who was fired last week for the alleged theft of abalone worth R7m has resurfaced as a department accounting officer in the Eastern Cape.

Siphokazi Ndudane, who was DDG for fisheries management until last Friday, was announced by Eastern Cape premier Oscar Mabuyane as the new head of department for rural development and agrarian reform in the province on Wednesday - just five days later.

Ndudane has denied any wrongdoing.

According to a dismissal letter seen by TimesLIVE, Ndudane was shown the door from the fisheries department on November 29 after she was found guilty of stealing three tons of abalone, valued at approximately R7m.

The letter - signed by the director-general Mike Mlengana - states that the decision to sack Ndudane was arrived at after a disciplinary hearing that lasted four days.

The dismissal letter reads: "You were charged in terms of public service co-coordinating bargaining council (PSCBC) resolution no. 1 of 2003, read with chapter 7 of the SMS Handbook. The disciplinary hearing took place from 25-29 November 2019.

"The chairperson found you guilty of theft of three tons of abalone to the value of approximately R7m from the department's stores in Paarden Island in December 2017 or January 2018.

"Having considered all the evidence and having heard argument from the initiator, the chairperson pronounced a sanction of dismissal as the only possible sanction to be imposed upon you.

"This misconduct is of a serious nature and deserves to be eradicated and deterred within the department in order to better achieve the goals of the department and broader public. I therefore give effect to the sanction pronounced by the chairperson of the disciplinary hearing."

Ndudane denied that she ever stole, however.

"I deny the allegations of theft of three tons of abalone. There was nothing unlawful, misrepresenting nor false about the operation since an approved 252A request was received from the directorate of public prosecutions by the police," she said in a written reply.

"Therefore, until the conclusion of the NPA investigations, the DG could not have established the facts - hence I deny the allegations as nothing but defamation."

Ndudane said it was laughable that Mlengana wrote her a dismissal letter when she had already resigned on November 12.

"On November 25 to 29, after the DG accepted my resignation, he decides to run a disciplinary hearing, which he has been postponing since June 14 2018. I was not present in the hearing," she said.

She threatened legal action against Mlengana and the department "to challenge the legality" of her dismissal as well as a "brazen disregard of the rule of law".

Questioned about her new job in the Eastern Cape, Ndudane said she did not declare her dismissal to her new employer because "the letter of the DG was emailed to me at 3.45pm on November 29 and I was already appointed in the EC".

Mabuyane's spokesperson, Mvusiwekhaya Sicwetsha, said the premier learnt about Ndudane's dismissal only after she had been appointed to the new position as head of department.

"When Ms Ndudane was appointed by the Eastern Cape provincial government, she was not fired and had not gone to the disciplinary hearing. The premier only got to know about this after she had been appointed," said Sicwetsha.

"When Ms Ndudane was appointed by the the Eastern Cape provincial government, she was not fired by her former employer. She was on a protracted suspension. Even the letter paraded on social media was signed after she had been appointed.

"When she was interviewed after she had declared the suspension voluntarily, the panel saw no reason why she cannot be considered for the position - given that at that time there was no decision to fire her, as she was on a protracted suspension."

Abalone worth an estimated R4m was found on a farm at Hekpoort on the West Rand.
News
2 years ago

Robben Island was the scene of a game of cat-and-mouse on Tuesday between law enforcement authorities and alleged abalone poachers stranded at sea.
News
2 years ago

Agriculture‚ Forestry and Fisheries Minister Senzeni Zokwana has effectively axed the director-general in his department‚ Mike Mlengana‚ the latest ...
Politics
3 years ago