Hyatt Hotel 'too public' so Jonas, Zuma and Hlongwane met at Gupta home 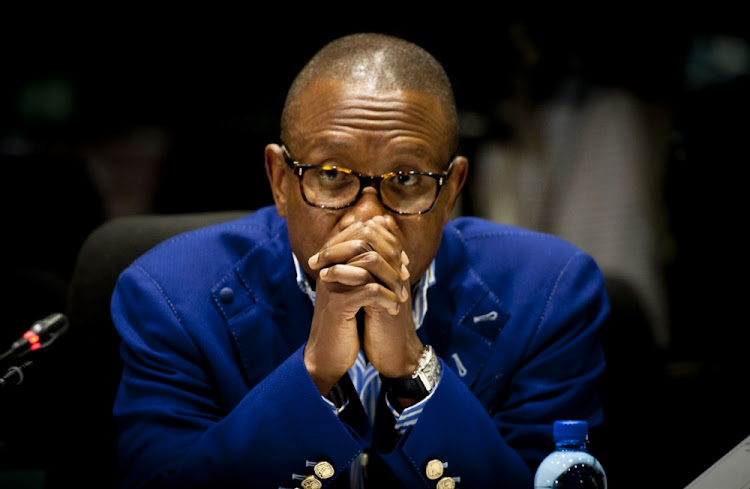 Fana Hlongwane in 2014 at the Seriti Commission. Hlongwane testified briefly on Wednesday at the state capture inquiry.
Image: Gallo Images

ANC member Fana Hlongwane has corroborated parts of Duduzane Zuma's testimony at the state capture inquiry, denying that a bribe was offered to former deputy finance minister Mcebisi Jonas during a meeting between the three of them.

Hlongwane, who appeared briefly before the commission on Wednesday, made quick work of questions relating to a meeting between himself, Jonas and former president Jacob Zuma's son at the Gupta family's Saxonwold home in 2015.

Jonas previously alleged that he was taken from the Hyatt Hotel in Rosebank by Duduzane Zuma to the Gupta compound nearby on December 23 2015. The meeting was conducted under the impression that Jonas was meeting Zuma and Hlongwane to discuss rumours that Hlongwane was blackmailing Jonas.

It was at this meeting that Jonas was allegedly offered the job of finance minister, plus a R600m bribe by the Gupta family - apparently in exchange for doing the family's bidding once he took office.

Duduzane Zuma asked why meetings were held at Gupta mansion, not his own home 600m away

Duduzane Zuma maintains that there was nothing wrong in taking former deputy finance minister Mcebisi Jonas to the Gupta family's Saxonwold home in ...
Politics
2 years ago

When Zuma appeared before the commission in October, he conceded that he had arranged the meeting between Jonas and Hlongwane - who are old friends - and drove Jonas to the Gupta compound. Asked why he was taken to the Gupta family's home, Zuma said it was a matter of a "proximity and a time-frame issue". He maintained that there was nothing wrong in doing so.

Hlongwane explained that he mandated Zuma to set up the meeting and denied that he spread rumours about Jonas at the time.

"Zuma was highlighting to me that he had been hearing rumours that I was allegedly blackmailing Jonas. He mentioned it several times on different occasions. I did not take up the matter at the time because I thought it improbable because of the relationship I had with Jonas," he said.

"In the intervening period I made an undertaking, which he had asked me to make, that I am not going to raise the issue prior to the meeting I demanded must be held. I placed the responsibility on him squarely. I said, 'I would like you to confront this issue in mine and his presence.' The meeting was duly arranged."

Former public protector Thuli Madonsela has come out guns blazing, denying Duduzane Zuma’s claim at the Zondo Commission that she did not give him a ...
Politics
2 years ago

Hlongwane said the hotel was too public a meeting venue.

"The Hyatt was a problem for me. I called Zuma. I said, 'Let us find a private venue for this meeting.' On the same telephone conversation, I spoke to Jonas. He ascertained a venue which was both a business venue and a residence. We went to that venue and the meeting duly took place," he said.

"I had my own issues in my mind, so I needed to clear the air - and points were duly raised. Jonas’s response was that he does not have a recollection of ever having said that. It was not a long meeting … Essentially, that was it."

Hlongwane said he could not remember whether he had been to the Gupta family's Saxonwold residence before that day. He could also not recall the specifics of the rumours that he had allegedly spread about Jonas.

A Gupta-owned house in highly sought-after Saxonwold in Johannesburg was sold for R2.6m on Monday.
News
2 years ago