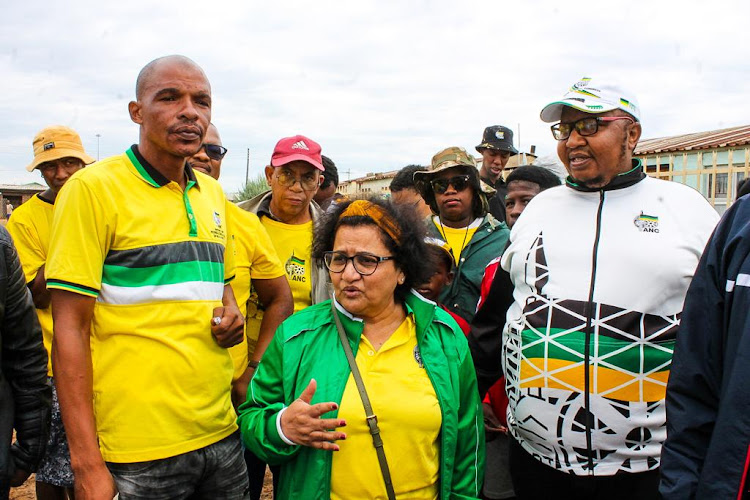 ANC deputy secretary-general Jessie Duarte and NEC member Mondli Gungubele visited Galeshewe ahead of the party's January 8 event in Kimberley. Duarte used the opportunity to lash out about infighting in the party.
Image: ANC Northern Cape via Twitter

ANC deputy secretary-general Jessie Duarte has warned party members to stop being arrogant and selfish and unite for the continued survival of the 108-year-old organisation.

Duarte was addressing ANC branch leaders and members at Galeshewe in Kimberley ahead of the party's birthday celebration billed for Saturday.

Duarte, who was spitting fire, said the interests of individuals - from branch level to national - must never be above those of the ANC.

To this end, she said, lessons can be drawn from the outcome of the ANC 2017 national conference at Nasrec which she lauded for producing a "mixture" of leaders who went to conference belonging to different factions.

Duarte was taken aback by a feud between an ANC branch leader and an ANC councillor in ward 4 in Galeshewe that got so dirty it led to the burning of the councillor's house.

What was more shocking, she said, was that the councillor and the ANC branch chair were at each other's throats to please their egos at the expense of the ANC.

"We can't say the ANC lives and the ANC leads while people live like this," ANC deputy secretary Jessie Duarte told local leaders at Galeshewe in ...
Politics
1 year ago

"No one is going to break the ANC any further. Nasrec taught us a good thing.

"Comrade Mondli (Gungubele) and I went to Nasrec on opposite sides but ANC branches said: 'Hey you guys up there, we want a united national leadership and not an NDZ (Nkosazana Dlamini-Zuma) or CR (Cyril Ramaphosa), but an ANC leadership'."

Duarte went on to disband the ANC branch in ward 4 and ordered the establishment of a task team by no later than next Tuesday.

She said the survival of the ANC was for the benefit of everyone and warned that infighting and individualism was killing the party.

According to Duarte, the same individualism was what made the ANC lose its governing status in Gauteng in the previous general elections.

"If the ANC dies in our hands, it is unforgivable. Gauteng messed around and now (the party) only needs to lose one seat to the opposition to lose power," said Duarte.

"And why did it get there? It is because of the nonsense of people fighting over nothing for individual power. And power is nothing. It is an empty promise with no value. What is valuable is the ANC, not power.

"For the ANC to remain in power, it needs people who do not want individual power so much that they are willing to destroy the organisation to get that power."

ANC braced for battles on many big fronts in 2020

Intense internal political battles are expected in the ANC and DA this year.
News
1 year ago