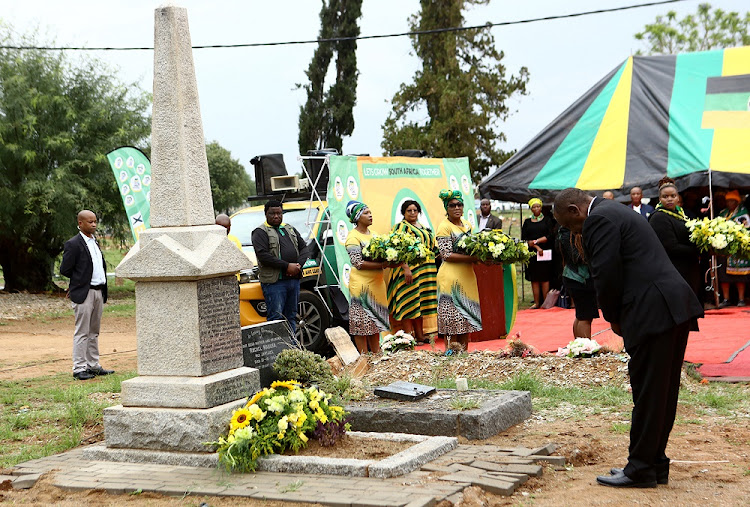 At the gravesite of Sol Plaatje, President Cyril Ramaphosa said the aspirations of ANC leaders from that era 'will be realised when we act much faster on the land reform process'.
Image: Masi Losi/Sunday Times

President Cyril Ramaphosa kicked off Wednesday's commemoration of the ANC’s 108th birthday by paying tribute to the first secretary-general of the ANC, Sol Plaatje.

Ramaphosa visited his grave site at the West End cemetery in Kimberley, where he and other party leaders laid wreaths.

The president of the ANC said he had a personal connection to Plaatje because he too served as secretary general of the party.

“We are also here to draw inspiration from his life because he was a servant leader,” Ramaphosa said.

The visit to Plaatje’s grave was the first of a number of events meant to celebrate the party’s birthday this weekend.

“We want to pledge to you, that we will continue on the path that you crafted,” Ramaphosa pledged to Plaatje.

“The dreams and aspirations that Sol Plaatje and his ilk felt will be realised when we act much faster on the land reform process,” Ramaphosa said, after invoking the writings of Plaatje on the 1913 land act that left black South Africans as pariahs in their own land.

Ramaphosa is expected to lead a cake-cutting celebration in Galeshewe later on Wednesday.

President Cyril Ramaphosa demanded answers from officials of the Phokwane Municipality in Pampierstad in the Northern Cape over why the sewerage ...
Politics
1 year ago