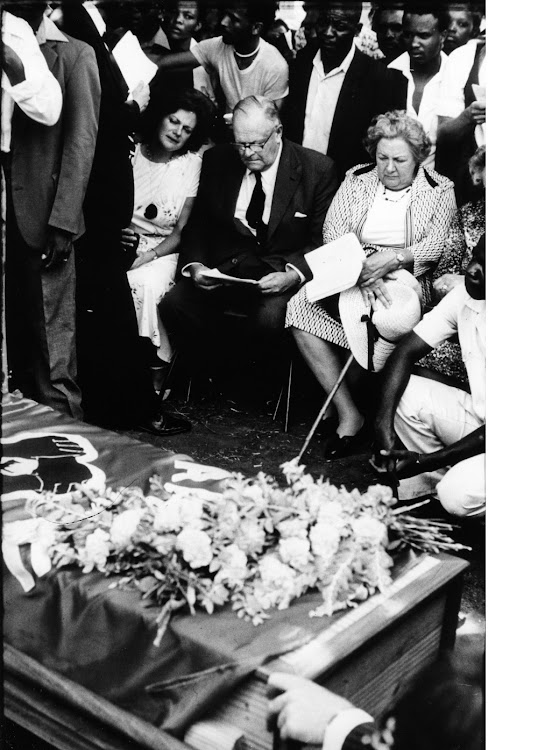 Neil Aggett's parents Aubrey and Joy (since deceased) and sister Jill are joined by mourners at his 1982 funeral. Archive image
Image: James Soullier 13/02/1982

As the fresh inquest into 1982 death of trade unionist Dr Neil Aggett, who died while in police custody, started on Monday, his family has called on all those who may know the truth, or even had a hand in his death, to come forward.

The family’s lawyer, Howard Varney, expressed gratitude to some of the officers who had already come forward.

“We are grateful there are some former police officers who are willing to speak the truth about what really took place in John Vorster Square during those years.

“We appreciate that in the early 1980s they found themselves in a terrible predicament. They were required to lie under oath, failing which not only would their livelihoods and careers be at risk, but they themselves might be physically abused or worse. They had every reason to fear the repercussions,” Varney said in his opening statement.

He was speaking at the high court in Johannesburg, where a fresh inquest into Aggett’s death started on Monday.

“While they did commit the crime of perjury in lying under oath in the 1982 inquest, that crime has long prescribed and they face no legal consequences for now disclosing the truth. We encourage more police officers to come forward and unburden themselves and  help the Aggett family heal and reach closure,” Varney said.

Aggett was a medical doctor who worked in hospitals in Soweto, Mthatha and Tembisa. He championed worker rights through active involvement in the African Food and Canning Workers’ Union. He was detained by the apartheid security branch in 1981 at the then John Vorster Square police cells in downtown Johannesburg. He was found dead on February 5 1982.

The Big Read: Through the eyes of a hero

There was always something wonderfully counterintuitive about Neil Aggett as an anti-apartheid campaigner - he was young, white and qualified in ...
News
7 years ago

Varney warned that the wrath of the law would come down on those who continued to lie about how Aggett died.

“Those who persist with charade and cover must be held to account. We remind these officers that those who lie under oath before these proceedings will commit the crime of perjury and the family will vigorously pursue such cases,” he said.

Aggett was 28 when he was found hanging in his cell after being detained for 70 days. Apartheid police  alleged that he had committed suicide.

Prior to his death, Aggett had written to the magistrate responsible for overseeing detainees, explaining that he was being tortured, but his complaint was investigated only weeks later.

This is the second inquest into Aggett’s death. The first was held in 1982 under the watch of magistrate Pieter Kotze.

Timol died in 1971 after falling from the 10th floor of John Vorster Square, where he had been detained. While the original inquest in 1972 concluded that Timol had committed suicide, the reopened inquest in 2017 found  his death was the result of being pushed.

Varney said the security branch and apartheid police were in safe hands under Kotze’s rule.

“He intervened and curtailed cross-examination by the Aggett family’s counsel and often ruled that detainees’ statements were inadmissible. He ignored evidence and reached grossly improbable conclusions that were nothing less than breathtaking,” Varney said.

Medical evidence and a forensic pathologist would be some of the evidence relied upon in the inquest.

Varney said had the inquest been heard earlier, Whitehead could have been brought to account.

The family was hoping that although there would be no arrest, the truth would bring them closure.

Fanus Coetzee, for the police, gave a brief opening statement to the court.

“We are not here to seek justification for any torture done by any arm of the government,” he said, adding that he was aware that uncomfortable and hurtful information would be heard in the proceedings.

“May these proceedings find the truth and may it give healing to those in need of it,” he said.

Once more the ghosts of apartheid's horrors will arise, haunting the inquest into Neil Aggett's death

It is almost 38 years since the body of 28-year-old doctor and trade union activist Neil Hudson Aggett was found hanging from the bars of cell 209 in ...
Opinion & Analysis
1 year ago

The legal team of Joao Rodrigues, the retired Security Branch administrative clerk charged with the murder of anti-apartheid activist Ahmed Timol in ...
News
2 years ago