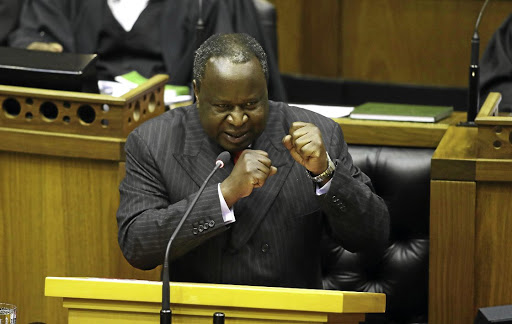 Finance minister Tito Mboweni has clarified a social media post which sparked speculation that he might be leaving office.

At the weekend, Mboweni tweeted that “it is good to retire gracefully” and not “overstay your time in office”.

Politics and Longevity. Political history shows that overstaying your time in office is bad. Unlike royalty, you may be ejected from State House in an undignified manner. It is good to retire gracefully.

The tweet sent social media into a buzz, as some of his followers worried about his employment status.

However, Mboweni told the SABC he was not going anywhere soon.

“Resigning from where? No, no, no. I was referring to heads of state who have overstayed their welcome. I'm not a head of state,” said Mboweni.

The tweet came after he recently got into hot water with the ANC after calling for a public debate on the party's resolution to nationalise the SA Reserve Bank (SARB).

Last week, Mboweni made Twitter's top trending list after he questioned what the ANC sought to achieve by nationalising the bank.

He also suggesting that there was no logic behind the exercise, as “90% of the SARB profits were handed over to the National Revenue Fund”.

Finance minister Tito Mboweni does not support the nationalisation of the SARB.
Politics
2 years ago

TimesLIVE reported that the party's spokesperson, Pule Mabe, expressed concern over Mboweni's comments, saying he should act with care and be cautious at all times on matters of policy, given his position as minister of finance, including subjecting himself to the overall communications protocols of the ANC.

“Those who serve in leadership structures of our movement, especially within the national executive committee (NEC), the highest decision-making body in between conferences, are expected at all times to uphold and defend resolutions of the ANC on public platforms.”

The ANC has censured finance minister and senior member Tito Mboweni for saying the party’s resolution to nationalise the SA Reserve Bank was a ...
Politics
2 years ago

Redi Tlhabi has defended finance minister Tito Mboweni, after backlash about his tweets on the ANC's resolution to nationalise the SA Reserve Bank.
News
2 years ago